The builder, Perfect Probuild Private Ltd, a 100 per cent subsidiary of the Antrikish Group had on August 25, 2010, obtained sanction from the Noida Authority for construction of a residential complex comprising of 560 flats by name of Antrikish Kanball 3G. 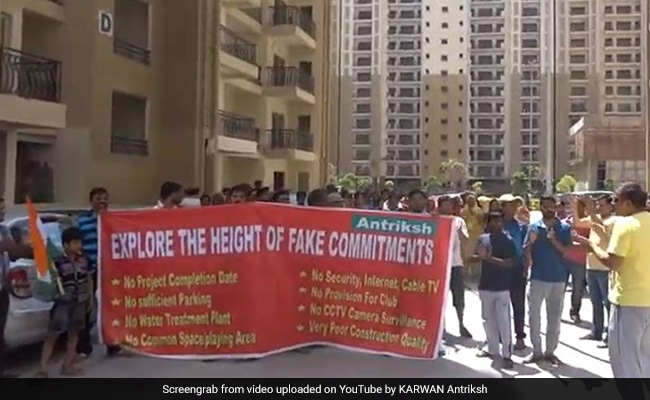 A compensation of Rs 3.28 crore should be imposed on a builder in Noida for illegally extracting ground water and discharging untreated sewage in green belt area, a committee told the National Green Tribunal on Monday.

The committee, comprising officials from the Uttar Pradesh Pollution Control Board and Central Ground Water Authority, told a bench headed by NGT Chairperson Justice Adarsh Kumar Goel that ground water is being extracted without obtaining a ''No Objection Certificate'' from CGWA.

"As per intimation given by applicants, the builder commenced the project on January 29, 2011 and started giving possession of flats from December 2014. The builder has installed two bore wells. The provision of rain water harvesting has been made but it is not operational," the committee told the bench.

Besides, there is no sewage treatment plant arrangement for 560 flats with 475 families residing in the apartment, it said.

It also informed the bench that a 500kva diesel gen-set has been installed for electricity supply but a chimney for it has not been set up as per the guidelines of the Central Pollution Control Board.

The committee has recommended an environmental compensation of Rs 3,28,50,000 on the builder.

The tribunal took note of the report and sought compliance report while posting the matter for hearing on February 11.

The tribunal was hearing a plea filed by residents of Antrikish Kanball in Sector 77, Noida, alleging illegal extraction of ground water, discharge of untreated sewage water in green belt and storm water drain, operation of diesel generator sets without chimney, non-operation of the rainwater harvesting system and operation of residential complex without obtaining ''consent to operate'' from the Uttar Pradesh Pollution Control Board by the builder.

The builder, Perfect Probuild Private Ltd, a 100 per cent subsidiary of the Antrikish Group had on August 25, 2010, obtained sanction from the Noida Authority for construction of a residential complex comprising of 560 flats by name of Antrikish Kanball 3G.

The plea, filed by advocate Salik Shafique, said the builder in March 2015 started giving possession of the flats to the buyers which includes the applicants, and by 2019 almost 450 families have started living in the society.

The builder failed to secure water connection from the Noida authority and continued to supply water in the apartments from two illegal borewells located in the partially constructed basement of the residential society, without obtaining permission from the Central Ground Water Authority, it alleged.

"The smoke generated from the diesel generator sets in absence of chimneys directly enter the houses of the residents which includes children and senior citizens, and they are exposed to the obnoxious air almost on daily basis," the plea said.

The residents from time to time resorted to protests and even approached regulatory authorities but no action has been taken against the builders by the authorities, the plea alleged.