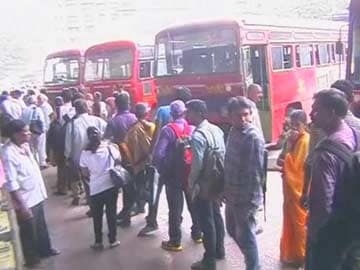 Dombivli, Thane: A woman conductor on a state transport bus was dragged out of the vehicle, stripped and beaten by a male passenger on the outskirts of Mumbai this morning, police said.

The incident took place on a bus which runs between Kalyan and Panvel in the Thane district, at around 8:30 am while the 34-year-old conductor was on her first trip.

Initially, none of the other passengers helped the conductor. They allegedly just stood and watched while the accused beat up and tore the woman's clothes. Later, a group of students who were onboard the bus, intervened and stopped the accused.

"I asked him to get off the bus and he pulled me by my feet and dragged me off the bus and made me lie down on the road. He then ripped my clothes and began kicking me. There was another bus behind us, and the conductor of that bus tried to save me; he then beat her up too. This incident occurred at the bus stop, when the bus was stationary and passengers were boarding the bus, but none of them came to my rescue."

Singh, who was on his way to Panvel in the neighbouring Raigad district, had allegedly boarded the bus from the wrong door, which the driver had objected to. Singh started abusing the driver, at which point the woman conductor asked him "Why are you abusing someone who is your father's age?"

At this point some students, who were in the bus, intervened and apprehended the accused and handed him over to the police.