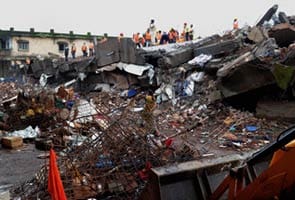 Thane: Three people have been killed and 15 others have sustained serious injuries after a two-storey building, in which a garment factory was run, collapsed in Bhiwandi in Thane. The incident happened around 1 am.

Rescue and relief operations are on in full swing and 35 people have been pulled out from the debris so far. Officials say they fear some people might still be trapped.

Initial reports suggest the building collapsed due to ongoing construction work. A third floor was being added to the old structure, even when people working the graveyard shift were present in the building.

"We used to work there. I don't know what happened. It suddenly collapsed while we were working inside," said an injured worker.

Police are on the lookout for the owner of the building. "We have filed a case of culpable homicide," Thane Police Commissioner, KP Raghuvanshi said.

This is the second building collapse in the Thane district in less than a fortnight. Seven people were killed when an abandoned four-storey building, which was occupied by some unauthorised dwellers, collapsed in Mumbra on June 22.

Promoted
Listen to the latest songs, only on JioSaavn.com
In April, Thane civic chief RA Rajeev had admitted that nearly 90 per cent of buildings were illegal after 74 people were killed when an under-construction building had collapsed in the area. However, civic authorities have failed to evacuate residents of 57 buildings in Thane that have declared unsafe.