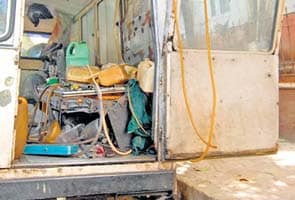 Mumbai: Businessmen and executives in SoBo, particularly Ballard Pier, better not be casual with their cars, especially if chauffeur-driven, because schemers are hankering to make a quick buck by pilfering petrol and diesel from vehicles. And complicit in the fraud are chauffeurs of car owners, while the latter sit oblivious in their offices.

Even as law-breakers sack up on the pilferage, the law-enforcers themselves have not been able to resist the lure of saving up on fuel costs. All all the selling price of stolen petrol is Rs 25 per litre, which is almost 50 per cent of the market price; it is then sold to buyers at the rate of Rs 30 per litre.

Policemen on motorcycles sporting police stickers getting a tank full from a certain stationary vehicle is a sight not missed by many, said a source. One such vehicle is operated by a person identified as Irshadbhai, a source said. Majority of the policemen who buy petrol from the racketeers are either attached to the MRA Marg police station or the Protection Branch, which is barely 50m from the point where the fuel is sold.

Investigations by MiD DAY revealed that the fuel racket starts around 10 am, when most businessmen are at work. Their drivers slip out of the office compound or parking lot with the vehicle and head towards a decrepit van parked on Kumpta Road in Ballard Estate. This vehicle has an incorrect number plate and flat tyres.

Petrol is then siphoned out of the swanky luxurious cars and filled into plastic cans. On an average at least 50 cars and two-wheelers visit the area to sell or buy petrol, eyewitnesses said. An executive, who has an office in the area, told this reporter that the driver has to be introduced to the racketeer before he can sell or buy petrol. "Outsiders are not encouraged. The standard reply is we have stopped business," said the executive, who had caught his driver selling fuel red-handed last month.

MiD DAY used a decoy to buy petrol recently. The operator said he did not have stock as no cars had come in that day. Eyewitnesses said sedans and heavy vehicles with large fuel capacities like Mercedes, Audi and BMW bring in a windfall to the drivers and racketeer too. It is difficult to detect the loss if the quantity in the tank is huge.

Promoted
Listen to the latest songs, only on JioSaavn.com
Once the vehicle moves in to discharge the fuel, the bonnet of the car is opened immediately and the reverse petrol pipe of the engine is disconnected. It is soon attached to the racketeer's own pipe with the other end forced into a can. The driver is asked to start the engine and in less than two minutes, more than 20 litres is siphoned off into the plastic cans.

Senior Inspector Padmakar Juhikar attached to MRA Marg police station, under whose jurisdiction the theft is taking place, when informed about the racket told this reporter he would soon raid the place. "Thanks for the input. Inspector Deshmukh will raid the place with immediate effect," said Juhikar.