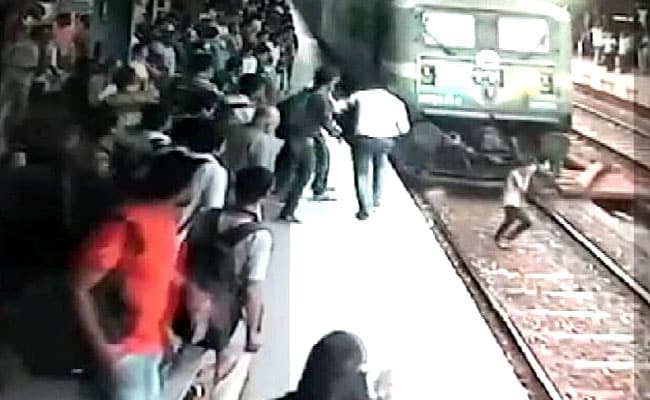 CCTV footage from Mumbai's Bhandup station showed a teen being knocked down by a train.

Mumbai: It was music that nearly killed her. Almost a month ago, 19-year-old Pratiksha Natekar had a brush with death. The video of her standing on the tracks and getting hit by a train engine was widely circulated on social media. It was even reported that she was on earphones and didn't hear the train coming. Ms Natekar has now told NDTV that at the time, she was listening to music on her cellphone. And she has appealed to all to learn from her experience.

"I would appeal to everyone to not plug in earphones while using the railways. Don't use headphones while boarding a train or waiting for a train," Ms Natekar, told NDTV. In fact, it is best to use a foot overbridge to cross tracks, added the girl, whose survival has been hailed as nothing less than miraculous.

Using cellphones and listening to music on earphones while driving is illegal. If caught, one has to pay a hefty fine. The police repeatedly appeals to pedestrians not to use earphones, especially when crossing a road or a bridge. But even so, reports keep coming of frequent accidents and deaths due to the use of earphones.

Ms Natekar had a providential escape. On May 13, while trying to cross a railway track in Mumbai's Bhandup station, she got hit by an oncoming train.

A cellphone video shot by a passenger showed her panicking and running towards the train.  Then she freezes, turns around and covers her face. The train hits her and rolls on.

Promoted
Listen to the latest songs, only on JioSaavn.com
Ms Natekar says she woke up only in the hospital and has no memory of the collision. "I was crossing the tracks when I suddenly saw the train coming. I was stunned and I did not know what to do. I don't know what happened. When I woke up I was in hospital," she said.

Ms Natekar suffered minor injuries on her lips, eyes and her head. "We were scared. We lost hope of seeing her alive," her grandmother said.