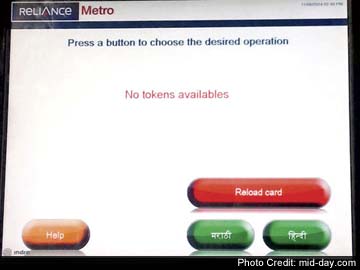 Mumbai: While the Metro offers a smooth ride between the Eastern and Western suburbs, commuters are facing a problem even before they can step into the train. mid-day observed during its trip on Tuesday and Wednesday on the 11.04-km Versova-Andheri-Ghatkopar Metro corridor, that the Automatic Ticket Vending Machines (ATVMs) were either unable to dispense tokens or couldn't give out change to travellers.

At the Andheri Metro station, people were unable to get change from the ATVMs. Hitendra Pachkale, a passenger at the station, said, "I had come to experience the Metro and wanted to go to Versova and come back.

I gave the attendant at the machine Rs 50 and asked him for three tickets, but he told me to give the exact amount - R30 - as the machine apparently was running short of notes. One of my family members also faced a shortage of notes at Ghatkopar on the day of inauguration i.e. Sunday."

At Jagruti Nagar, the machine was not dispensing multiple tickets due to shortage of change, causing inconvenience to passengers. Even the escalator leading to the exit points was not working. Meanwhile, at Azad Nagar on Wednesday, there was no ATVM at all on the eastern end of the station. An ATVM at Ghatkopar didn't have any tokens to give out, as its display read: 'No tokens availables' (sic).

At Ghatkopar, we observed that the exit automatic fare collection (AFC) gates had been kept permanently open. Ideally, the gates would only open when one puts the token coin in. But, in order to manage and allow smooth quick movement of the crowd, the gates are being operated in the completely open position, with an official collecting the tokens in a cardboard box. Despite all these setbacks, the staff effectively managed the crowd and cooperated in helping people find their way around the city's newest transport system.

Promoted
Listen to the latest songs, only on JioSaavn.com
A spokesperson of Mumbai Metro One Private Ltd denied any shortage of tokens or coins, or that it was causing any problems. He said, "We have no shortage of coins and the machines are being replenished as per schedule to meet the demand. Maybe the notes weren't put inside the machine properly, and that is why it didn't accept it."
Speaking about the open AFC gates, he added, "We engage different types of combination of AFC gates operation for effective crowd management. Our endeavour is safe and faster commuter disbursal both into and from the platform."