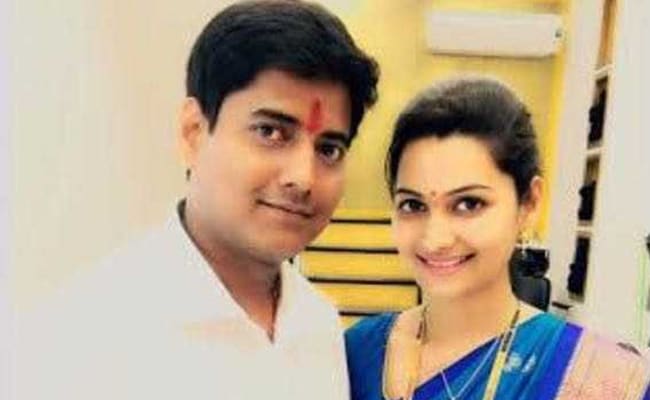 Satish Mangle and his wife Shraddha were arrested in the extortion case on Friday.

Thane: The Thane police has arrested a private detective and his wife who were trying to extort seven crore rupees from a senior IAS officer from Maharashtra. Satish Mangle had allegedly demanded the sum for retracting allegations of corruption against suspended civil servant Radheyshyam Mopalwar. He also threatened to leak his phone call recordings if the amount was not paid.

In August, Mr Mopalwar was removed as the vice-chairman and managing director of the Maharashtra State Road Development Corporation or MSRDC by Chief Minister Devendra Fadnavis. His sacking resulted from a row over some audio clips, leaked by Mangle, in which the official was purportedly heard fixing a deal for a plot.

Mr Mopalwar approached the Thane Police following the threat calls from Mangle, who along with his wife and friend Anil Vedmehta, contacted the civil servant and asked him to come at Kharegaon toll plaza on Nashik Highway on October 23 with the amount, Mr Singh said.

The couple told Mr Mopalwar that he needed to pay 7 crore rupees to ensure the safety of his family members. However, the IAS officer supplied those calls to the Thane police, who then strategized a plan to nab Mangle and his wife.

A police constable, disguised in a different attire, carried 1 crore rupees to the residence of Mangle and caught them red handed.

Promoted
Listen to the latest songs, only on JioSaavn.com
Mangle had earlier leaked Mr Mopalwar's phone conversations to the media alleging that the civil servant had suggested that "bribes are inevitable in order to get work done in the state secretariat". He had demanded a sum of 10 crores to return the same clips which was later settled at 7 crores after Mr Mopalwar refused to pay the amount.