It Rains in Mumbai, Pours in Metro, Goes Viral on Twitter 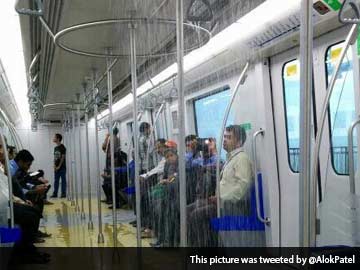 Mumbai: As heavy rains lashed Mumbai on Wednesday, photos and a video of a compartment of the Mumbai Metro with a wildly leaking roof went viral online. (Mumbai: Metro Notches 7.6 Million Commuters in Three Weeks)

The Metro had opened with great fanfare on June 8 this year.

The image of a mini downpour inside one of its compartments puts a question mark on Mumbai Metro's services and its impending fare hike. (Mumbai Metro Could Cost More, Court Refuses to Stop New Fares)

"Of the sixteen trains in service, an AC unit of one of the trains reportedly malfunctioned during heavy showers. It was replaced with a train that was kept on standby to ensure that services were not affected. The train will start plying from tomorrow," said an official of the  Mumbai Metro One Private Limited. (Mumbai: Over One Million Travelled in Metro in First 59 Hours)

The 11.4-km metro line linking the suburb of Versova in the west to Ghatkopar in the east has seen a record number of passengers since it became operational. The train service has reduced the travel time from Ghatkopar to Versova to 20 minutes. (Technical Snag Hits Mumbai Metro on Day One)

But commuters of Mumbai Metro will have to pay more - between Rs 10 and Rs 40 depending on the distance - from July 9.

Anil Ambani's Reliance Infra, which leads the consortium that built and runs the metro, has said the introductory fare of Rs 10 will be discontinued this month. The project had cost much more than its original budget, said Reliance Infra, adding that it has the right to charge passengers more to recover some of those costs.

The state government had disagreed and moved the Bombay High Court over the matter. On June 24, the High Court refused to stop the introduction of new fares till a committee, including representatives of all stake-holders and the union government, reaches a decision on the issue.

Promoted
Listen to the latest songs, only on JioSaavn.com
Meanwhile, people on Twitter had a field day, as they took potshots at Mumbai Metro's 'personal shower service'. Here are some of the best tweets.

If you're running late, just take a shower on your way to office in the new Mumbai Metro. pic.twitter.com/CWbox2MojB