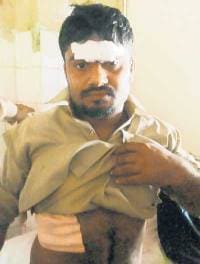 Mumbai: Autorickshaw driver Ramesh Yadav foiled an attempted rape on a 17-year-old girl by four men in Malvani in the wee hours of Wednesday.

Hearing screams emanating from a buffalo shed close to his house in Malvani around 3 am, Yadav rushed there only to find a girl pinned down by four men.

When he tried to intervene, one of the men told him that the girl was his girlfriend and he should mind his own business. The girl, however, said that she had been abducted and brought there against her will.

This infuriated Yadav, who beat up the men and sent them packing. While beating a retreat, however, they threatened that they would be back with more men and that Yadav should be careful.

The girl, meanwhile, made a run for it and Yadav went back to his house to sleep.

"I made them run from the shed. They were no match for me. They threatened that they would be back, but I wasn't perturbed," said Yadav.

The men did return sometime later with more support and with choppers, iron rods and hockey sticks. They found Yadav fast asleep in his house and began attacking him even before he could wake up.

No neighbours came to Yadav's aid despite the commotion and he was stabbed multiple times in the abdomen, head and chest.

The brave driver did not give up, however, and chased his attackers for close to a 100 metres before losing consciousness and falling down on the road.

He was rushed to the government-owned Bhagwati Hospital, where he was admitted to the Intensive Care Unit and is currently recuperating.

Despite suffering multiple injuries, Yadav said he is happy at having saved the girl. "You never know what they would have done to the girl.

I am happy to have saved her even if I got injured in the process. The culprits must be caught and put behind bars lest they try to attack the girl again," he said.

"We have registered Yadav's complaint against four unknown people. We will also try to find out about the girl after the four men are arrested," said Assistant Commissioner of Police Ramrao Pawar.
Comments
Autorickshaw driver Ramesh Yadav foiled an attempted rape on a 17-year-old girl by four men in Malvani in the wee hours of Wednesday.