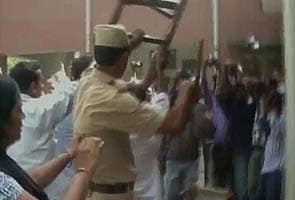 Policemen try to control the protesting lawyers in Meerut

Meerut/Ghaziabad: An agitation by lawyers in Meerut demanding the setting up of a high court bench in western Uttar Pradesh turned violent on Wednesday when civil administration employees confronted them.

Lawyers from Ghaziabad also took out a procession at the district collectorate and court compound.

Following the Meerut violence, the Ghaziabad bar gave a call for boycott of court proceedings today.

The lawyers also reiterated their demand to transfer the district magistrate.

Yesterday, the Ghaziabad lawyers remained on strike and took out a procession demanding a high court bench in western Uttar Pradesh.

Earlier, the lawyers staged a dharna or a sit-in protest and stalled traffic movement on National Highway-58, NH-24, the Grand Trunk Road and other city roads.

Promoted
Listen to the latest songs, only on JioSaavn.com
Mr Tyagi rued that western Uttar Pradesh, with a population of 80 million and an area of 98,939 sq km had no high court bench, while states where just 10 lakh people lived had a full-fledged high court.