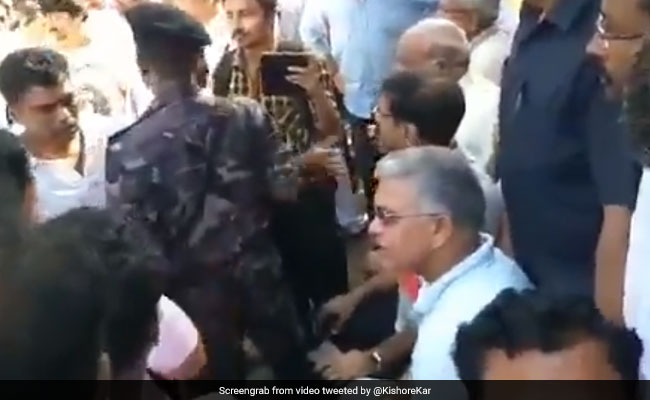 The BJP's chief in West Bengal Dilip Ghosh was allegedly heckled by rival Trinamool Congress workers at Kolkata this morning. He had stopped for a cup of tea at a roadside stall with supporters when suddenly, he found himself surrounded by a group of people.

The men kicked a table near Mr Ghosh and shouted slogans against him, said eyewitnesses.

The police were called in before the sloganeering escalated into something serious. They separated the two groups and defused the situation.

Mr Ghosh then sat on a chair, surrounded by his supporters in a protective ring, and continued sipping tea.

The incident happened at Lake Town, near the posh Salt Lake where Mr Ghosh lives.

Mr Ghosh's 'tea party' was not an impromptu one, but organised by BJP supporters as an apparent launch of the BJP's campaign 'Tea Party With Dilip Da' - a counter to Chief Minister Mamata Banerjee's 'Didi Ke Bolo (Talk to Didi)' campaign.

"The BJP made a mistake in choosing the location for their tea party. This area is a Trinamool stronghold and the inevitable happened," said Mr Bose.

The BJP has been making inroads into Ms Banerjee's stronghold since the last assembly election in 2016. The Trinamool Congress has conceded much ground to the BJP in the state Ms Banerjee has ruled since 2012, and violent clashes between BJP and Trinamool Congress workers continue to break out from time to time.

In the national election held in April and May, West Bengal saw a saffron surge as the BJP won 18 of the state's 42 Lok Sabha seats. Ms Banerjee's party won 22 seats.

Over the past two years, the BJP's efforts on the ground saw multiple confrontations with the state government, especially over rallies and marches held on religious events, and chants of "Jai Shri Ram" competing with the traditional "Ma Durga".