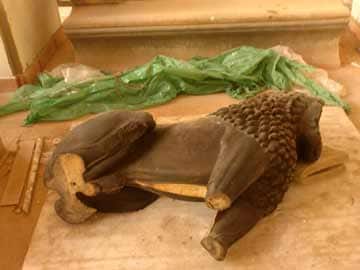 Kolkata: A 2200-year-old seven foot sculpture from the Ashoka period called the Rampurva Lion Capitol has been broken at the Indian Museum in Kolkata while being moved from one place to another.

This occurred last week but the museum has not reported it so far. The Lion Capitol was broken during the renovation of the museum for its bicentenary scheduled in February.

West Bengal governor, MK Narayanan, who is chairman of the museum's board of trustees, has denied any breakage. "Nothing has broken as far as I know," he told NDTV on Thursday.

But pictures and documents with NDTV confirm these are fresh breakages and not an old one, as the museum claims. Meanwhile, the museum has put the statue back together but that too, say experts, in the most haphazard way.

The museum claims the statue was always in two parts and those two parts came apart during relocation. But external experts confirm the breaks are fresh. In fact, you can see the old joint, intact. Experts are demanding answers.

"What is upsetting me is the utter lack of transparency, one, and the second, public accountability," says Tapati Guha Thakurta, art historian and member of the museum's board of trustees and its bicentenary committee from which she resigned in 2010.

The statue has now apparently been put together with epoxy adhesive and painted over. NDTV was denied access to the statue.  In fact, the museum has been closed to public since September for renovation - a renovation that has cost the country one of its most priceless artefacts.