Kolkata Metro Services Disrupted For Over An Hour, Thousands Affected

A south-bound train was stranded at Belgachia metro station in the northern section of the network due to power tripping. 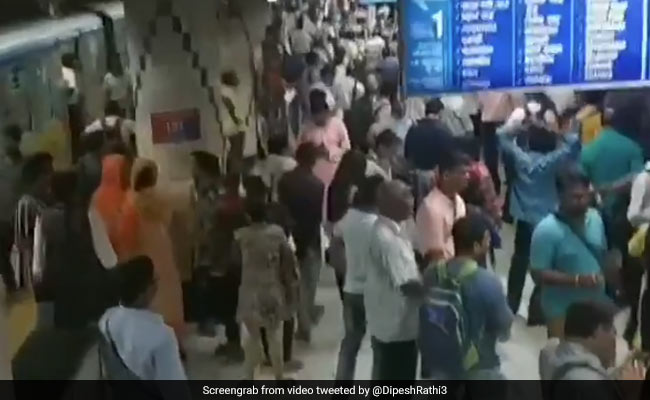 Thousands of passengers were stranded in Kolkata after metro rail services were disrupted today evening.

Thousands of passengers were stranded in Kolkata after metro rail services were disrupted today evening. The entire metro service in Kolkata was affected for at least an hour, officials said.

The initial disruption happened in the segment between Kolkata Central and the metro network's northern section which started at 6.11 pm, an official said. A south-bound train was stranded at Belgachia metro station -- third station from the north -- in the northern section of the network due to power tripping.

The segment between Kolkata Central and the metro's southern section was affected 6.30 pm onward.

The entire metro service in Kolkata was affected from 6.30 to 7.32 pm, officials said. It was then that authorities could manage to turn north-bound trains around from Kolkata Central.

The public relations officer of Kolkata Metro, Indrani Banerjee, said passengers who were north-bound refused to get off stranded trains. "The problem could have been minimised. Passengers just wouldn't cooperate," the officer said.

While train services from Kolkata Central to the south section of the metro network have been partially restored, services on the north section continue to remain paralysed.

The spokesperson said a battery-operated engine has been pressed into service at Belgachia to tow away the train that triggered the disruption.

The disruption of the metro services led to a huge rush in buses and taxis in Kolkata this evening, which is when most daily commuters take metro trains.

"Left office at 7 pm. I could able to get a cab 5 mins back. Yet to reach home! That's how Kolkata Metro cripples the city if down!" a daily commuter Alok Patro said on micro-blogging site Twitter.

"Metro not working because of short circuit and that even in office hours," a passenger Dipesh Rathi tweeted.