As the gates of the heritage eatery opened at 11 am, around 25 customers, most of them regulars at the eatery, trooped in. 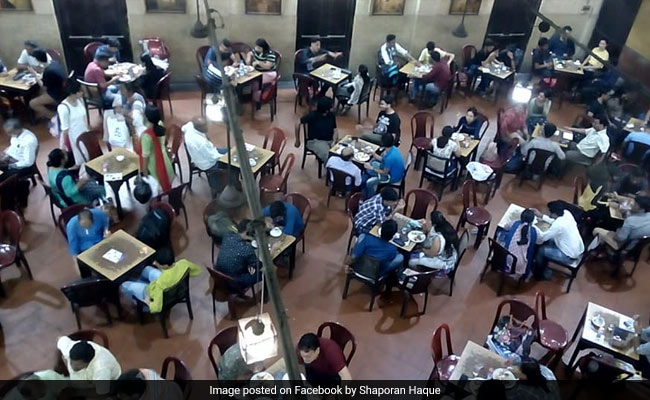 The iconic Indian Coffee House in Kolkata's College Street area - a favourite joint of poets, writers, painters and artists over the years - reopened on Thursday, 103 days after downing its shutters due to the COVID-19 outbreak and lockdown.

As the gates of the heritage eatery opened at 11 am, around 25 customers, most of them regulars at the eatery, trooped in.

To ensure social distancing, arrangements were made for fewer than normal customers on the two floors of the eatery, a spokesman of Indian Coffee House said.

"We have disinfected the entire premises and made wearing masks mandatory for both the patrons and staff," the spokesman said.

The authorities reopened the joint after holding talks with the local police station and health department over COVID-19 safety protocols and guidelines.

The eatery will be open from 11 am to 6 pm every day except Sundays. In the pre-COVID era, the Coffee House usually operated between 9 am and 9 pm.

"We are providing sanitiser to everyone at the entrance, disallowing anyone not wearing masks, checking body temperature of patrons with a thermal gun and making our waiters wear gloves," the spokesman said.

Customers are happy to be back to their favourite joint.

"Whenever I used to visit College Street area earlier, I visited Coffee House. I befriended many people here over the years. We were heartbroken when it was closed down and we regularly inquired when it will open again," said Aditya Ghosh, one of the early visitors.

The place, a melting pot of people from the world of art and culture for decades, had downed its shutters on March 20 this year after the West Bengal government imposed  lockdown.

Started as Albert Hall in 1942 by the Coffee Board, it was named Coffee House in 1947 and was frequented by intellectuals such as author Sunil Gangopadhyay, poet Shakti Chattopadhyay and even American poet Allen Ginsberg during his sojourn to India.

In 1958, the management decided to close down the Coffee House but it was re-opened the same year, thanks to the efforts of professors of the then Presidency College, now Presidency University, and the Calcutta University. The two institutes are located in the vicinity of the eatery.

Students and faculty from several colleges and universities also visit the joint, which has become integrated with the cultural heritage of the city.

A Memorial For Lives Lost To Covid And Unsaid Goodbyes