Ahead of Amit Shah Rally, 'BJP Go Back' Posters On Kolkata Streets

Ahead of BJP Chief Amit Shah rally in Kolkata, the Trinamool Congress has declared a state-wide protest against the National Register of Citizens in Assam, except in Kolkata. 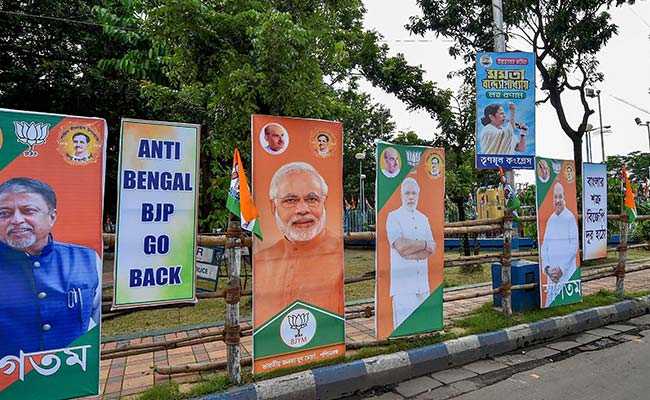 Ahead of Amit Shah rally in Kolkata on Saturday, TMC launches poster war.

Ahead of BJP president Amit Shah's rally in Kolkata today, the Trinamool Congress has launched a 'poster war' against the BJP to protest against the National Register of Citizens exercise in Assam. Posters with 'Anti-Bengal BJP Go Back' written on them could be seen in and around Mayo road, the venue where Mr Shah's rally is scheduled to be held.

The Trinamool Congress has declared a state-wide protest against the National Register of Citizens in Assam, except in Kolkata. The BJP has labelled the protest an attempt to sabotage Mr Shah's rally.

Mr Shah had earlier said that he would not only go to Kolkata but is even prepared to get arrested. Mr Shah had said, "It does not matter whether I get permission or not, I will definitely go to Kolkata. If the state government wants, it can arrest me."

The BJP and the Opposition has been undergoing a confrontation over the release of the National Register of Citizens draft list in Assam on July 30, which has left out nearly 40 lakh people in Assam while incorporating names of 2.89 crore people out of 3.29 crore applicants.

Bengal Chief Minister Mamata Banerjee has been consistently disapproving the latest NRC draft. She has accused the BJP of conspiracy against minorities.

Mr Shah's Kolkata visit aims at expanding the party's base in the state. In 2014, it had won just two seats from Bengal and hopes to improve its tally in 2019. The BJP chief has handed his party an ambitious target of 50 per cent Lok Sabha seats in the state.

Tomorrow, I will be in West Bengal to address the "Yuva Swabhiman Samavesh" organised by @BJYM in Kolkata. pic.twitter.com/52DRi3V79m

The the political temperature in Bengal has been shooting up over Assam's citizens' list, more so after Bengal chief minister controversially claimed that it could trigger violence, even civil war. Mr Shah had promptly hit back, insisting that his government would ensure that the court verdict on the citizens' scheme was implemented down to the last "full stop and comma".