Tourism, Plantation Hit As Kerala Continues To Reel Under Floods

The tourism industry was recovering from cancellation of hotel bookings following the Nipah outbreak, heavy rains and floods came as a huge blow, say industry sources. 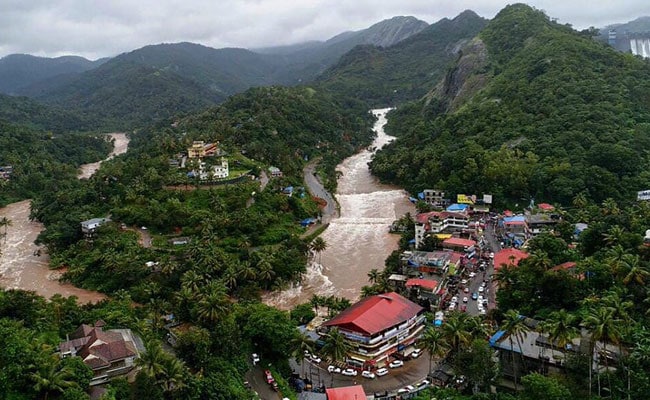 Fresh rains lashed several parts of Kerala today as the state continued to reel under the impact of unprecedented floods, even as the weatherman issued a warning cautioning fishermen against venturing into the sea, officials said.

Some respite appeared on the the horizon for the worst-hit Idukki hill district where the water in the Idukki dam receded to 2,397.58 ft, alleviating concerns about floods in fresh downstream areas, particularly in Ernakulam district.

The current level does not warrant issuing any warning, they said.

Over one lakh people have been displaced and rendered homeless and the death toll has risen to 39.

The weatherman has issued a fresh warning asking fishermen not to venture into the sea, saying the coasts of Kerala and Lakshadweep may experience winds packing speeds of 35 to 45 kmph, sometimes going up to 60 kmph.

Ten columns of Army, a unit of Madras Regiment along with personnel of Navy, Air Force and the NDRF were engaged in relief and rescue operations in badly-hit districts including Kozhikode, Idukki, Malappuram, Kannur and Wayanad, defence sources said.

Large parts of the state known for its verdant valleys and plantations looked like a massive swamp, with houses flattened and marooned, and crops destroyed.

Rolling down menacingly from upper reaches, flood water wrecked a large number of homes in these districts.

Distraught victims could be seen gathering utensils, cots and other belongings from the debris before shifting to safer places.

The massive deluge has also wrecked the state's travel and tourism industry and seriously impacted its plantation sector.

Just as the tourism industry was recovering from the cancellation of bookings at hotels and resorts following the Nipah outbreak, heavy rains and floods came as a huge blow, say industry sources.

The state's tourism department was all set to organise the famed snake boat races, which have mesmerised visitors for decades, by giving it an new format- Champion's Boat League (CBL)- on the lines of the Indian Premier League (IPL) from August 11 this year. The event has now been postponed.

"We will find a new date. The government is currently busy with relief and rescue operations due to the floods and landslides in various parts of the state," Director of Kerala Tourism P Bala Kiran told PTI.

The Responsible Tourism Mission under the tourism department had drawn up a programme for organsing feasts at countryside homes for tourists during the onam festival next week. The flood-hit areas are now certain to be excluded, sources said.

According to E M Najeeb, senior vice president of the Indian Association of Tour Operators (IATO),70-80 per cent of hotel bookings in scenic Idukki, Munnar and Kumarakkom, the most preferred tourist destinations, have been cancelled.

The blooming of 'Neelakurinji' flowers in the hills of Munnar, an event that occurs once in 12 years and is eagerly awaited, has also been affected by the rains.

Idukki produces over a dozen varieties of spices, including pepper, cardamom, cinnamon, nutmeg and turmeric, besides many others, and the destruction has been widespread.

Spices board sources say 35-40 per cent cardamom and pepper crops have been destroyed.

According to Ajit B K, the secretary of the Association of Planters of Kerala, the tea, coffee, cardamom and rubber planters have suffered losses of about Rs 600 crore so far.

Union Home Minister Rajnath Singh had announced an aid of Rs 100 crore as immediate central assistance to the state.

Chief Minister Pinarayi Vijayan had submitted a memorandum to Mr Singh, who visited the state yesterday, saying the state has suffered a loss of Rs 8,316 crore so far due to the floods.