The Makaravillaku will be held on Januaury 14 and the Lord Ayyappa shrine will be closed at 7 am on January 20. 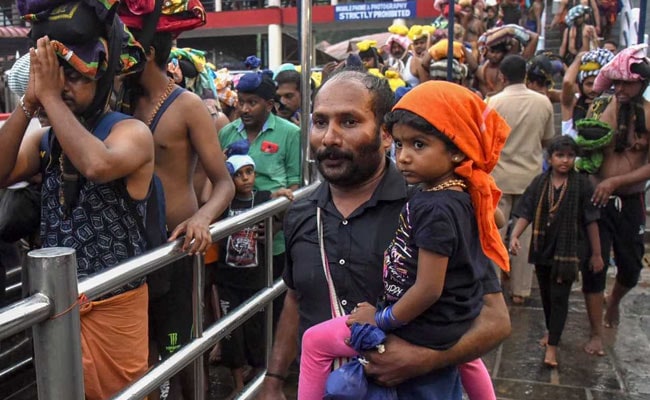 Thousands of devotees thronged the Sabarimala temple for the 21-day Makaravilakku festival.

The hill shrine of Lord Ayyappa at Sabarimala in Kerala opened on Sunday evening for the 21-day Makaravilakku festival amid heavy security.

The Sabarimala temple had closed on December 27, marking the culmination of the 41-day annual Mandala puja festivities.

There was a heavy rush of Ayyappa devotees when the shrine opened at 5 pm today.

Chief Priest VN Vasudevan Namboothiri opened the temple doors and performed the rituals inside the sanctum sanctorum as well as on the holy 18 steps after which the pilgrims were allowed to have a glimpse of Lord Ayyappa.

The Makaravillaku will be held on Januaury 14 and the shrine will be closed at 7 am on January 20.

Chanting swamiye saranam Ayyappa, thousands of devotees thronged the temple, after waiting for hours in long queues. However, no special pujas were held on Sunday.

The Ayyappa temple at Sabarimala had witnessed massive protests by devotees against the Kerala government's decision to implement the Supreme Court's September 28 verdict, opening its doors to women of all ages to offer prayers.

Traditionally, girls and women in the menstruating age group of 10-50 years were barred from offering prayers at the temple, the presiding deity of which is Naishtika Brahamachari or perennial celebate.

Main opposition Congress and the BJP backed the devotees in their protest against the entry of women of all ages inside the Lord Ayyappa shrine.

Over a dozen women have so far made unsuccessful attempts to trek to the Sabarimala shrine to offer prayers during the Mandalam season.