Despite the deployment of more than 1,000 security personnel, protests at the base camp in Pamba became violent. Journalists were attacked and a cameraperson was injured. 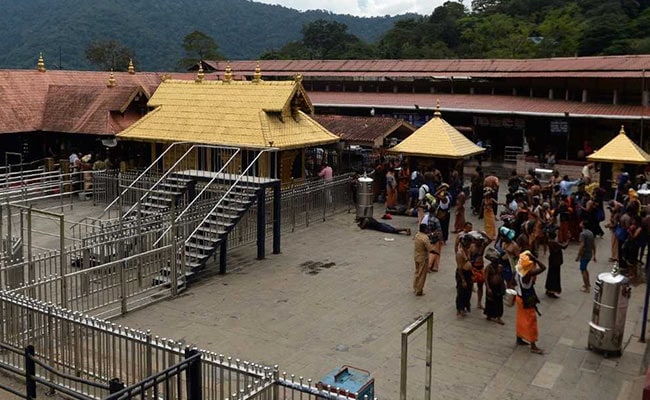 Last month, at least 12 women had tried to enter the Sabarimala temple.

For the second month in a row after a Supreme Court order allowed women of all ages to enter the Sabarimala temple, the hill shrine closed for another two weeks this evening without a single woman of reproductive age crossing its gates. The protesters, who had threatened, heckled and turned away around a dozen women last month, were back in force. But no young woman attempted the journey.

Despite the deployment of more than 1,000 security personnel, protests at the base camp in Pamba became violent. Journalists were attacked and a cameraperson was injured.

The Malayalam television channel to which the cameraperson belonged, said the protesters threw a bag with coconut at him, which was brought by some devotee as an offering.

Around mid-day, protesters surrounded and heckled a woman whom they suspected to be below 50 years in age. When the police later said she was 52, she was allowed to enter the temple and make offerings to Ayyappa, the presiding deity whose celibate state has triggered the ban on women aged between 10 and 50 years in age.

The woman, who came to the temple for a ceremony to initiate her six-month-old grandson to rice, later felt unwell and had to be hospitalized. Two other women, who were above the age of 50, were not allowed to enter at all by the protesters.

The Kerala High Court has told the state government that it has no right to interfere in the day-to-day affairs of the Ayyappa temple. The government's role, the court said, should be confined to maintaining law and order in the area.

Last month, at least 12 women had tried to enter the Sabarimala temple, but were forced to turn back by the protesters. Two of them had reached close to the final 18 steps to the temple.

The protests had intensified after the temple's head priest threatened that he would shut the temple if any young woman managed to make her way inside. On Monday, a video surfaced that showed the state BJP leader, Sreedharan Pillai, claiming that the thantri, or head priest, had consulted him before making the announcement.

While the thantri denied any such conversation, the matter has become a political controversy. Chief Minister PInarayi Vijayan tweeted to say that it proved the BJP and the Rashtriya Swayamsevak Sangh, its ideological mentor, had "connived to create trouble in Sabarimala".