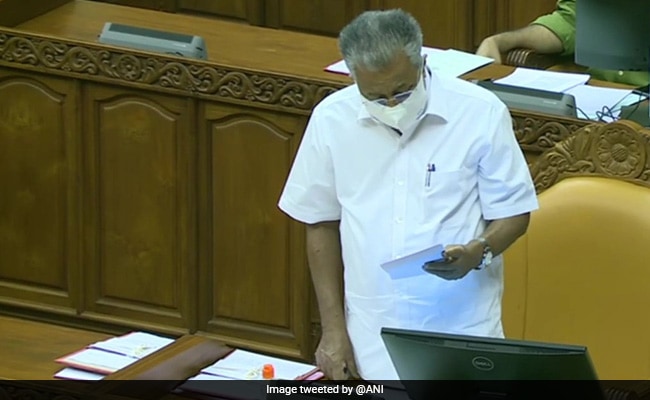 The resolution was supported by the Opposition

The Kerala Assembly today unanimously passed a resolution urging the central government to provide Covid vaccines free of cost in a time-bound manner.

Health Minister Veena George, who replaced KK Shailaja in the new cabinet, presented the resolution in the assembly. It was supported by the Opposition.

"In order to fight COVID-19, we need to provide free universal vaccination which will ensure that all sections of the society are protected from the virus," Ms George said.

Pinarayi Vijayan said if the burden of procuring vaccine is left to fall entirely on the states, their fiscal situation will be in dire straits.

"At this juncture, when the nation is passing through the second surge, it is quite unfortunate that there appears to be an attempt by the centre to absolve itself of its bounden duty to provide adequate supply of vaccine to the states," Mr Vijayan said in his letter.

Chief ministers of Bengal, Jharkhand have also urged the centre to allow free vaccination for the 18-44 age cohort. Yesterday, Mizoram Chief Minister asked Prime Minister Narendra Modi to make Covid vaccinations free of cost for all age groups in the hill state, becoming the first NDA ally to voice such a demand.

Flagging "various flaws" in the centre's inoculation drive, the Supreme Court on Monday pointed out the differential vaccine pricing, shortage of doses, and lack of access from rural areas of the country.

Under the centre's new "liberalised" policy, which came into effect May 1, states can buy up to 50 per cent of their vaccine needs from manufacturers, although at higher prices than that fixed for the centre.

The centre has pledged to vaccinate all of India by December. Vaccinations have slowed down or are on pause in many states because of a shortage of doses. The government says it hopes to have one crore doses per day by July. Foreign vaccines are expected to play a big part in it.

Currently, Serum Institute of India's Covishield and Bharat Biotech's Covaxin are being used in the vaccination drive that started in January. Russia's Sputnik V is the third vaccine to be approved for use in India.

The Kerala Assembly began its session on May 24, three days after the second Pinarayi Vijayan government was sworn in.