Read inOther Languages
This Article is From Jun 08, 2019

"Many Are Wondering Why Modi Is In Kerala Despite BJP's Zero": PM

PM Narendra Modi, who led the BJP to a resounding victory in the Lok Sabha elections and retained power for a successive term, said Kerala was as dear to him as Varanasi.

Political parties and pundits failed to gauge the public mood ahead of the Lok Sabha election that saw the BJP and its allies score a huge victory over opposition parties, PM Modi said in Kerala on Saturday, adding that though the state had not voted for his party, it was as "dear" to him as his constituency Varanasi.

"Many people must be wondering why Modi has come to Kerala to give a speech after BJP didn't even open its account in Kerala in the recently-held Lok Sabha election... But I don't differentiate between my countrymen... For me, the people of Kerala are just as much my own, as the people of Varanasi," he said.

PM Modi, who led the BJP to a resounding victory in the general elections and retained power for a successive term, said the elections proved that "people are God" in elections. 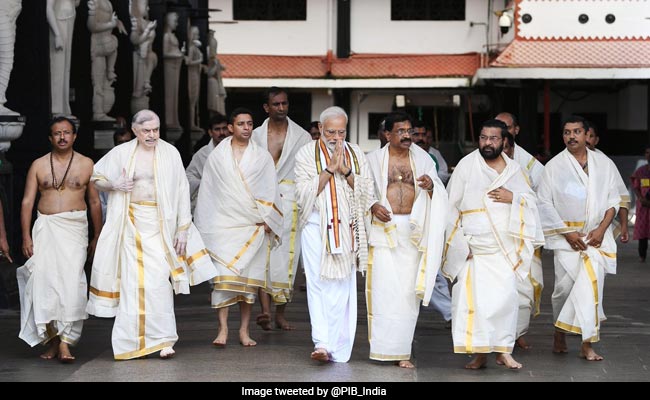 "Political parties and political pundits could not gauge people's mood. So did those involved in conducting (poll) surveys. But people gave a strong mandate for the BJP," he said.

"Elections have their place in democracy and it is the responsibility of the winner to take care of 130 crore people. Those who made us win or those who did not, both are our (people)," he added.

The BJP was not working for mere electoral politics and was keen on the country's progress and ensuring India gets its place of pride in the international arena, PM Modi said.

PM Modi also listed the steps the centre was taking to counter the Nipah virus scare in Kerala and the foot and mouth disease plaguing its cattle.

Kerala was among the few states where the BJP failed to beat expectations in the national elections last month as it roared back to power even breaching strongholds of regional parties in states like West Bengal and Odisha.

The opposition Congress, which failed miserably for the second consecutive time, had Kerala as one of its bright spots with party chief Rahul Gandhi scoring an easy victory from the state's Wayanad constituency despite losing his family citadel of Amethi in Uttar Pradesh.