The Travancore Devaswom Board will move the court either Saturday or Monday, board president A Padmakumar said even as the Sabarimala temple opened Friday evening amid mounting tension in the backdrop of the stand-off over protests by devotees. 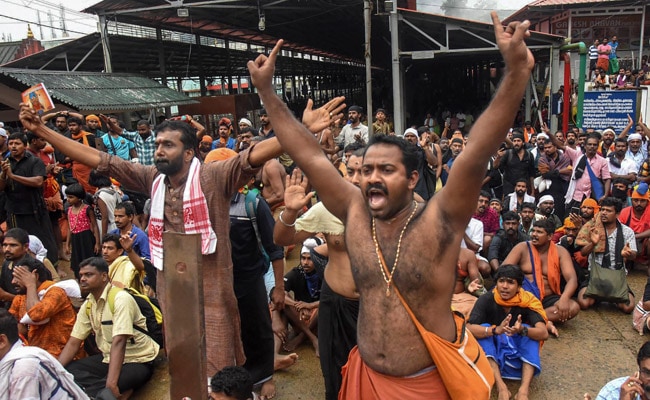 The Travancore Devaswom Board, which manages the Sabarimala shrine on Friday decided to approach the Supreme Court seeking more time to implement its order allowing women in the menstrual age to offer prayers at the Lord Ayyappa temple.

The decision was taken after discussion with legal experts and board members, Travancore Devaswom Board president A Padmakumar told reporters in Kerala's Pamba town, a day ahead of the commencement of the two-month long annual pilgrim season.

The board will move the court either Saturday or Monday, he said even as the temple opened Friday evening amid mounting tension in the backdrop of the stand-off over protests by devotees against entry of women in 10-50 age group.

"If possible, we will move a petition in the Supreme Court either tomorrow or Monday," he said adding the board wants devotees to have peaceful darshan.

The move comes a day after the LDF government at an all-party meeting took a firm stand that it was bound to implement the top court order and rejected suggestions by opposition parties that it seek time from the top court.

The temple and surrounding areas have come under unprecedented security for the season which draws lakhs of devotees to offer prayers to Lord Ayyappa, a celibate.

The Supreme Court is slated to hear petitions seeking review of its September 28 order in January, but has refused to stay it.