The chief minister said that the MLA was making "a mockery of himself" as the "world has acknowledged the efficiency" of the Kerala government in containing the virus. 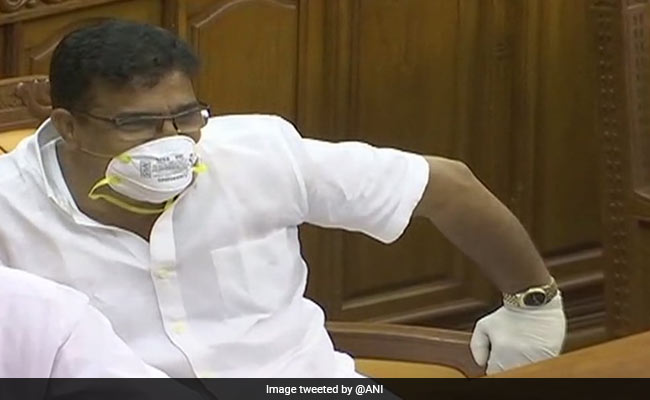 Parakkal Abdulla's the 'symbolic protest' did not go well with the ruling Left front.

Thiruvananthapuram: In the wake of the Nipah outbreak in Kerala which has claimed 16 lives, opposition MLA Parakkal Abdulla, of the United Democratic Front, walked the floor of the Kerala Assembly wearing a mask and gloves on Monday to demonstrate the impact that the Nipah virus has had. The Muslim League MLA's Kuttiady constituency, which is in Kozhikode district claimed, "everyone is wearing masks and gloves in my constituency and walking around," referring to the Nipah scare. But the 'symbolic protest' did not go well with the ruling Left front, with the MLA getting snubbed by Chief Minister Pinarayi Vijayan himself.

The chief minister said that the MLA was making "a mockery of himself" as the "world has acknowledged the efficiency" of the Kerala government in containing the virus.

Mr Vijayan, who had convened an all-party meet to discuss the Nipah outbreak, said that the situation had been "contained" and had said that there was no need to panic.

"There is no need for panic or fear. It's the consistent efforts of health officials and medical practitioners, that the situation has been contained," Mr Vijayan told the media.

"The protective gear is worn only two circumstances - only if people around are infected or if the concerned person himself is infected. The former is not true, and if the latter is true, the MLA should not be attending the Assembly," she said.

"Two people have recovered from Nipah and that isn't a huge achievement for us. They have recently tested negative after undergoing days on intensive care and treatment," Ms Shailaja said, speaking to the media.
Comments
Parakkal AbdullaKK ShailajaPinarayi Vijayan