The Supreme Court came down strongly on the Kerala government for seeking withdrawal of the case, underlining that such privilege amounted to a betrayal of the trust of Indian voters who elected them to office. 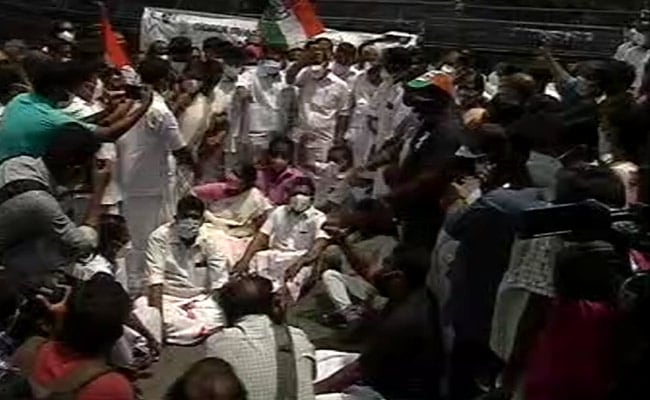 The opposition walked out of the Assembly and announced a boycott of Thursday's House proceedings.

The Congress-led UDF walked out of the Kerala Assembly today after the ruling LDF rejected its demand for the resignation of Education Minister V Sivankutty, who is named in a case about ruckus during protests in the Assembly in 2015.

An appeal by the state government on Wednesday, seeking withdrawal of the case, had led to a strong reaction by the Supreme Court, with the court saying "privilege and immunity of legislators is not a gate to claim exemption from criminal law".

This morning, the Congress, during Zero Hour, moved a notice for an adjournment motion pressing for Mr Sivankutty's resignation, citing that the incident had brought disgrace to the state Assembly.

Referring to Mr Sivankutty's involvement in the incident, Congress legislator PT Thomas wondered how a minister who had destroyed public property could protect the life and property of others.

Chief Minister Pinarayi Vijayan, however, rejected the demand and also justified his government's decision to approach the top court with the plea seeking withdrawal of the case.

Protesting against the Chief Minister's reply, the opposition walked out of the House and announced a boycott of today's proceedings.

"The Education Minister should resign. But Kerala Chief Minister today in the Assembly made a speech challenging the Supreme Court order. He is supporting those MLAs who destroyed public property (in 2015)," opposition leader VD Satheesan said at the Assembly complex.

On Wednesday, the Supreme Court came down strongly on the Kerala government claiming such privilege amounted to a betrayal of the trust of Indian voters who elected them to office.

"MPs and MLAs have to subscribe (and) bear true faith to the Constitution of India... Committing acts of destroying public property cannot be equated to freedom of speech. Legislators' privilege and immunity is not a gate to claim exemption from criminal law," a two-judge bench of Justices DY Chandrachud and MR Shah said as it delivered the verdict.

"What message are you sending to the public whom you represent? If they are not held accountable for their unruly and violent acts, there will be no deterrence to this kind of behaviour," the court asked.

The verdict has come as a jolt to the Pinarayi Vijayan government that won re-election in May.