The incident took place on Saturday after the legislator held a sit-in protest outside the local PWD office to draw attention to the condition of the local roads. 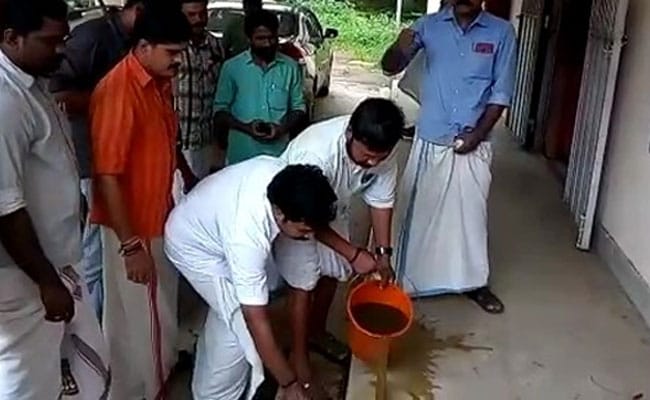 Geetha Gopi, the legislator, has filed a police complaint over the matter.

A group of Youth Congress workers "cleansed" an area outside the public works department with cow dung in Kerala's Thrissur, after a lawmaker from the Communist Party of India staged a protest there. The legislator, who is from the scheduled caste community, has alleged that their act is a "caste-based insult".

The incident took place on Saturday after the legislator held a sit-in protest outside the local PWD office to draw attention to the condition of the local roads.

"This is something which has really hurt me and my children. They had all the other means to protest against me, but they cannot resort to such crass, casteist measures. Youth Congress workers cleaned that area with cow dung water, and even the Congress panchayat president was present, shouting slogans," Geetha Gopi, 45, told NDTV.

CK Vinod, the Cherpu panchayat president, defended the Youth Congress workers' agitation, saying the Left had protested with cow dung in the past.

"We opposed the fake protests, dharna by the MLA, and it had nothing to do with the caste of the MLA. Cow dung and water has been used by Left workers also in the past. Untouchability is long gone. The fact that she has made this into a casteist issue, shows her mindset," he said.

The legislator has filed a police complaint over the matter. She will meet Chief Minister Pinarayi Vijayan and the Kerala Assembly Speaker on Tuesday, to lodge an official complaint with them.

Police have registered a case in the matter.