Amid the tragic news that 24 people have died in two landslide and flood-affected Kerala districts, there is some heart-warming news from the southern state - the story of young couple who refused to let the weather spoil their wedding fineries or delay the ceremony.

The resourceful couple - Aishwarya and Akash - converted a large aluminum cooking vessel into a boat to reach their wedding venue (itself partially flooded) in Thalavady in Alappuzha district.

The two were wed this morning in a small ceremony witnessed by a limited number of relatives.

"It was an auspicious time (the muhurath) and we just wanted to get the wedding done," a family member told reporters after videos of the unusual wedding 'procession' were widely shared online.

One video shows the couple seated inside the makeshift boat while a couple of men push them through roads with knee-deep flooded waters.

Akash turns back and waves at the person filming the scene and Aishwarya sports a broad smile. 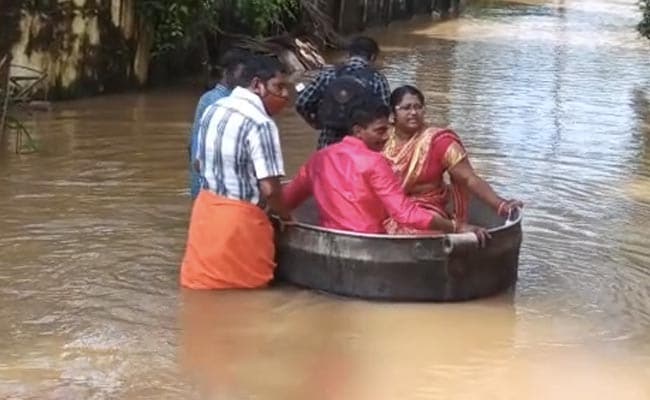 The couple turned an aluminum cooking vessel into a makeshift boat

Another video shows them at the wedding venue, sitting in front of the priest with family by their side.

After the wedding the couple told reporters - who were covering rising water levels in the district but raced to the hall when told about the wedding - that the guest list was small because of Covid.

Both husband and wife are health workers at a hospital in Chengannur.

They also told reporters that when they were at the venue just two days ago, there was no water.

Heavy rains have pounded Kerala over the past three days, leading to several landslides and frightening scenes of flooded roads from towns and villages.

The Pinarayi Vijayan government has requested aid from the Army, the Navy and the Air Force, and teams from the national disaster response force have been deployed to help in rescue and relief ops.

Intense spells of rain have also been reported from northwest and east India. Tamil Nadu also saw heavy rains, with three dead yesterday; two bodies were found in Namakkal and one in Kanyakumari.

Two Shutters Of Idukki Dam In Kerala To Be Opened Tomorrow