Authorities have decided to declare holidays for all educational institutions in nine out of the 14 districts in the state. 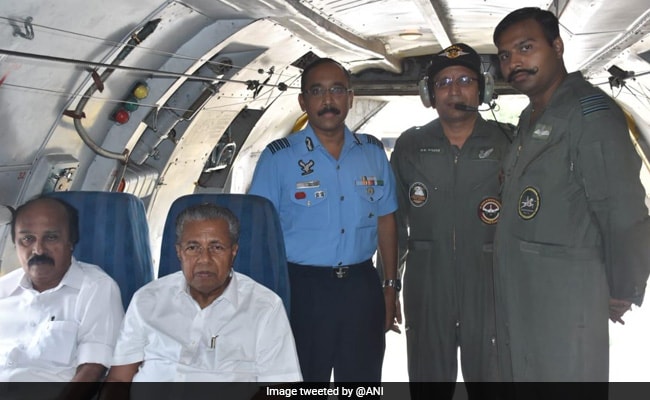 Kerala Chief Minister Pinarayi Vijayan on Tuesday assured people at a relief camp in Meppadi near Wayanad that the government will stand with all those who are suffering due to rains and floods for the past six days.

He gave this assurance even as the meteorological department gave a fresh red alert in Idukki, Alappuzha and Ernakulam districts of more rains, while massive rescue operations are currently on at Puthumala at Meppadi and Kavalapara near Malappuram where 46 bodies are feared trapped under the mud.

"The state government will do everything possible to give maximum help and support to all, so that they come back to normal life very quickly. Our first task is to complete the rescue operations and then we will shift our focus to extensive rehabilitation work," Mr Vijayan assured.

The biggest rescue operations are presently going on at Kavalapara where 20 earth moving equipments are working overtime to see if they can find another 39 people who have been reported missing after the landslide swept away an area close to 100 acres.

"An Army official Vishnu and his family had come visiting his relatives here and is reported missing," said a local resident who managed to flee the landslide.

According to the latest figures provided by the state government, the death toll touched 93 in Kerala and around 2.52 lakh people are put up at 1,332 relief camps across the state.

The total number of people in camps has come down marginally as in some districts people have started returning to their homes.

In low lying areas in Alappuzha and Ernakulam districts, which witnessed the worst ever floods last year and more heavy rains predicted in the coming two days, authorities have given directions to hundreds of people to vacate their homes and get to the nearest relief camps.

On Tuesday, more trains that were cancelled commenced operations, especially on routes in the northern part of the state.

Authorities decided to declare holidays for all educational institutions in nine out of the 14 districts in the state.

(Except for the headline, this story has not been edited by NDTV staff and is published from a syndicated feed.)
Comments
Kerala Chief Minister Pinarayi VijayanWayanad floodsKerala floods