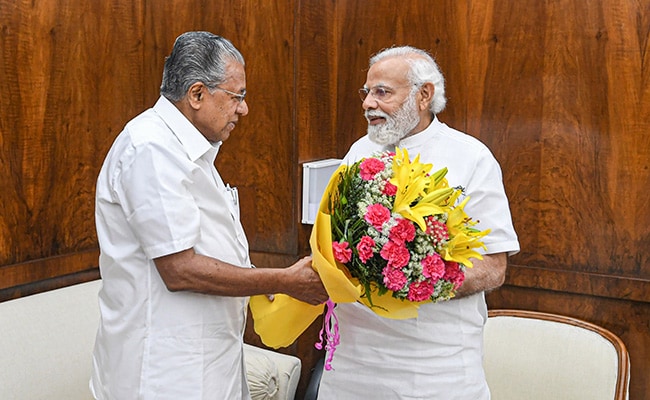 Kerala Chief Minister Pinarayi Vijayan has asked Prime Minister Narendra Modi to intervene in the issue of rising air fares in the country, saying that it was not only causing hardship to non-resident Indians (NRIs), but was also affecting revival of the tourism sector.

Besides rising air fares, another issue which Mr Vijayan drew the Prime Minister's attention to was the railways decision to abandon the Nemom Coaching Terminal project in Thiruvananthapuram.

The Chief Minister sought PM Modi's intervention for reconsidering abandoning of the project and to instead ensure that it gets early approval.

Both the issues were raised by Mr Vijayan in separate letters addressed to the Prime Minister on July 2.

Mr Vijayan said airline tickets both in the international and domestic sectors were "exorbitantly high" compared to pre-Covid rates and this situation is affecting NRIs.

He said Kerala's tourism sector is on the threshold of a turnaround and the high air fares "are a serious dampener to the revival of this sector".

CM @pinarayivijayan wrote to the Hon'ble @PMOIndia Shri. Narendra Modi ji seeking his immediate personal intervention in the issue of soaring airfares which is pulling our travel and tourism industry down and putting our pravasis to extreme hardship.

"I request your immediate personal intervention in this matter so as to alleviate the difficulties of NRIs and to help the tourism sector, the revival of which is vital for our economy," Mr Vijayan said in the letter.

In the other letter, Mr Vijayan said the railways' decision to drop the Nemom Coaching Terminal project was "a major setback to the rail infrastructure development of Kerala".

He said the project was first included in the Union Budget of 2011-12 and its importance was acknowledged by the Railways Minister while laying its foundation stone in March 2019.

Mr Vijayan said landowners whose land was acquired for the project would be put to undue hardship.

"The Nemom Coaching Terminal project, which is proposed as a satellite terminal for trains departing from and terminating at Thiruvananthapuram Central, is essential for the development of rail traffic in the State. I request you to intervene so that the decision to abandon the above project is reconsidered and to ensure that an early approval is granted for the same," the Chief Minister said in the letter.