While the family has alleged her hands were tied to the hospital bed, the hospital administration has denied lapses, stressing the patient "was not tied down, but was physically restrained on the advice of a psychiatrist, so that she would not remove her cannula". 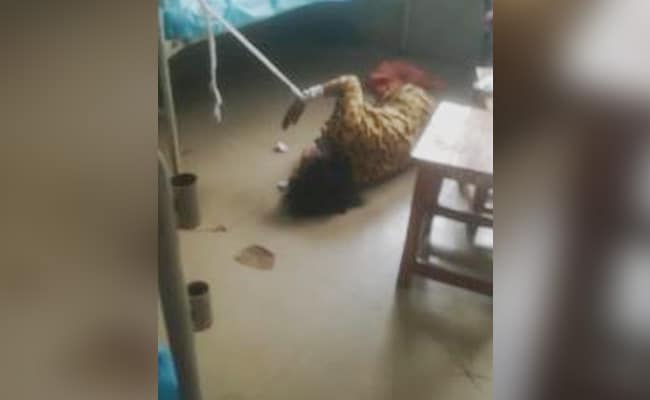 The Covid patient was found lying on the floor - injured and bleeding, the family alleged.

Congress MP TN Prathapan has written to Kerala Health Minister KK Shailaja as he sought action into the alleged lapses in the treatment of a 67-year-old woman, a Covid patient. According to the patient's family, she was found lying on the floor - injured and bleeding - at the Thrissur Medical College.

While the family has alleged her hands were tied to the hospital bed, the hospital administration has denied lapses, stressing the patient "was not tied down, but was physically restrained on the advice of a psychiatrist, so that she would not remove her cannula".

The Congress leader, in his letter, has said: "The elderly woman was shifted from COVID firstline treatment centre to the Thrissur Medical College on October 20 as COVID and related mental unrest worsened. The woman was made to lie down on a bed that had no side railings. Her hands were tied with a cloth to the bed. The elderly woman fell off the bed, and suffered deep injuries on her head and face, with bleeding."

TN Prathapan has alleged the Thrissur Medical College currently doesn't have the services of a psychological counsellors for treating patients with COVID-linked mental health issues, and that despite the family submitting complaints and pictures of the incident to various authorities, no action has been taken.

Farooq, the son-in-law of this elderly woman, told NDTV that six of his family members tested positive for coronavirus, and were admitted in different hospitals almost at the same time.

"Six of my family members tested positive, including my father-in-law. I was a bystander with my father-in-law at a private hospital. I got a call from the doctor of the COVID frontline centre, where few of my family members were admitted, saying my mother-in-law was being moved to the medical college. I gave the permission. And next day when a relative went to see the patient, she found her on the floor, injured. A bystander of another patient had clicked videos of her falling," he alleges.

The Medical College hospital authorities have claimed that these are false allegations. "She wasn't tied down, but physically restrained based on the advise of the psychiatrist. This was to prevent her from removing cannula. She fell down... it's unfortunate that it happened. She did not sustain deep injuries. There has been no lapse. We have submitted a detailed report to the health minister," a senior in-charge at the hospital told NDTV.