Thirty nine people have died since August 8 and around 60,000 people have been displaced or moved to relief centres. 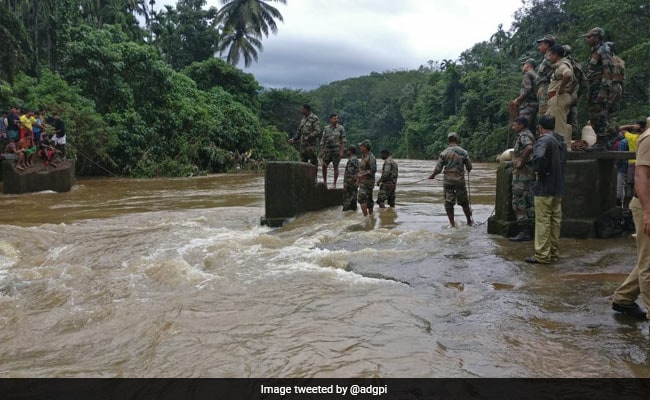 Chief Minister Pinarayi Vijayan earlier told the media that the devastation is worst since 1924.

Amid heavy rain across Kerala, landslides and flooding continue to be reported in several districts of the state including Idukki, Kozhikode, Kannur, Wayanad and Thiruvananthapuram.

A second stage or an orange alert was issued on Tuesday for Mullaperiyar dam, which is in Kerala but is operated by Tamil Nadu, and over 1,250 families were asked to move to relief camps.

Kerala Electricity Minister MM Mani said the shutters to Mullaperiyar dam would be opened around 1:30 am on Wednesday. "The State Relief Commissioner of Tamil Nadu has said that Tamil Nadu may release water to Kerala side of Periyar from Mullaperiyar reservoir considering high inflow into the reservoir. Hence, the State Executive Committee of the Kerala State Disaster Management Authority (KSDMA) has decided to release more water from Cheruthoni Dam," Chief Secretary of Kerala Kurien said earlier on Tuesday in a press statement.

All five shutters of the Cheruthoni dam of Idukki reservoir were opened again on Tuesday and people living close to Periyar banks in Ernakulam, Idukki and Thrissur were asked to move to safe zones.

Munnar, a popular tourist destination, remained flooded on Tuesday, and tourists were asked to "stay away".

"Movement to Munnar is not allowed, except for revenue officials, National Disaster Response Force (NDRF) personnel and defence forces. Tourists have been advised to stay away and vehicles are not being allowed to enter the town. Water levels are receding, though Munnar remains flooded. Situation is under control," Collector Jeevan Babu told NDTV.

Chief Minister Pinarayi Vijayan earlier told the media that the devastation is worst since 1924. He also announced the state would not celebrate Onam in the wake of the mass destruction and loss of lives.

Thirty nine people have died since August 8 after floods hit Kerala, and around 60,000 people have been displaced. The damage has been estimated at nearly 8,000 crore rupees.