Rahul Gandhi's team told the authorities that "serious questions" about intentional tampering with the aircraft could not be brushed aside.

NEW DELHI: Congress president Rahul Gandhi and four passengers on a chartered flight from Delhi to Karnataka got a major scare on Thursday after the aircraft reportedly developed "multiple faults", triggering a complaint to seek a probe to determine if there was any "intentional tampering" of the aircraft.

The complaint was filed by Kaushal Vidyarthee, a key member of Rahul Gandhi's team who was accompanying the Congress president.

The pilots were able to land the plane at Hubli airport but according to the complaint, only after two aborted attempts.

Mr Gandhi's team member said the "suspicious and faulty performance" of the aircraft were due to technical snags, "Serious questions related to intentional tampering with the aircraft cannot also be brushed aside and are required to be addressed and investigated," Mr Vidyarthee said. 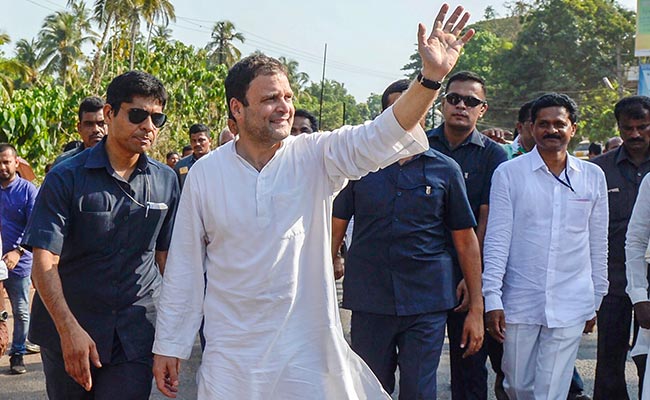 Karnataka Assembly Election 2018: Rahul Gandhi is leading the Congress's offensive against the BJP

He asked that the incident be "objectively and thoroughly investigated" and appropriate action be taken including grounding the aircraft till the investigation is completed.
Mr Gandhi's plane, which brought him to Karnataka where he is leading the Congress's offensive against the BJP for next month's assembly elections, had taken off from Delhi at around 9.20 am.

At around 10.45 am, Mr Vidyarthee said, the aircraft suddenly tilted to one side. It lost altitude and there was violent shuddering of the aircraft body though the weather outside was clear. A clanking noise was clearly audible from one side of the plane throughout, his letter said, recalling their 40-minute ordeal.

The complaint said the entire experience had left the passengers "with a lot of anxiety and distress" and positively fearing for their lives". It also shook the crew, he said, who were apparently petrified, Mr Vidyarthee said, describing the flight as "particularly frightening and uncommon".

Later in a tweet, Mr Vidyarthee called it the most "frightening experience in my life", referred to the plane going into what he called was a "free fall" but admired Mr Gandhi's composure and calmness "as he stood beside pilots trying to save the situation".

Civil aviation regulator later told news agency ANI that the problem was with the "autopilot mode and the pilot shifted to manual and landed safely."

"Such autopilot incidents are not uncommon," an official of the aviation regulator said, adding that it would carry out a detailed examination as was the norm for VIP flights.

"This is serious case of aviation mechanics failure. A serious accident was averted. A formal complaint has been submitted... to inquire into entire matter including possibility of foul play which led to technical slag, failure of autopilot and failure of rudders, which is completely unprecedented," Congress spokesperson Randeep Singh Surjewala said.
Comments
Rahul GandhiRahul Gandhi plan snagDGCA Civil Aviation Regulator