The district administration has decided to file a case against the violators as the authorities had granted permission for a toned-down ritual and had cancelled the wagon race. 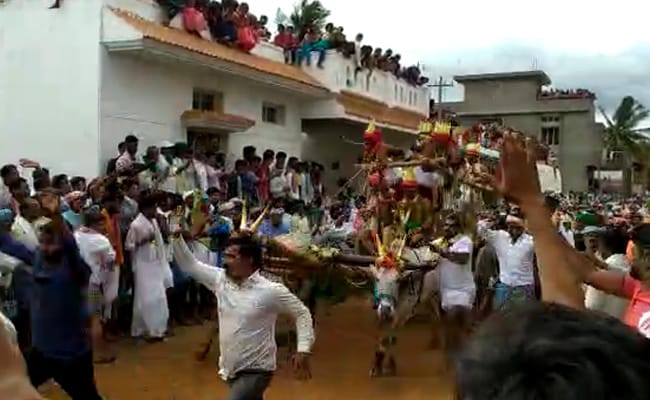 Amid a worrying spurt in coronavirus cases across the country, hundreds of people gathered in Karnataka's Haveri district today, in blatant violation of social distancing norms, to celebrate an annual temple festival.

In videos, devotees were seen - without masks - perched on roofs and gathered on a narrow street to witness the traditional "wagon race" - an ornate bullock cart procession - said to be an important part of the festival to worship lord Ramalingeshwara.

The district administration has decided to file a case against the violators as the authorities had granted permission for a toned-down ritual and had cancelled the wagon race.

The Centre allowed reopening of places of worship, malls and restaurants from June 9 across the country after they remained out of bounds since late March, when the nationwide lockdown kicked in to stem the spread of coronavirus.

Karnataka government had earlier said that even though the temples in the state will be opened to offer pooja and daily rituals, religious fairs and events will not be allowed.

In a similar incident, a large number of people turned up at the outskirts of Mangaluru for the opening of a bridge by BJP's State President Nalin Kateel and District In-charge Minister Kota Srinivasa Poojari.

Mr Kateel later clarified that people from surrounding areas thronged the venue of the opening of Gurupura Bridge despite repeated warnings.

Earlier in April, in the middle of the nationwide lockdown, a crowd of more than hundred people had gathered for a traditional chariot festival at a temple in Karnataka's Kalaburgi.

Karnataka has more than 6,500 coronavirus cases, including over 70 deaths.

State Health Education Minister K Sudhakar has said that experts have indicated a surge in coronavirus cases in the state in the month of August and the government was taking all precautionary measures in that direction.