"No Violation": Siddaramaiah Hits Out At Goa Deputy Speaker's Allegation Over Mahadayi Row

The reaction comes a day after Goa Assembly's Deputy Speaker Michael Lobo levelled the allegation after visiting Kanakumbi at the border of Karnataka and Goa with Speaker Pramod Sawant on Monday. 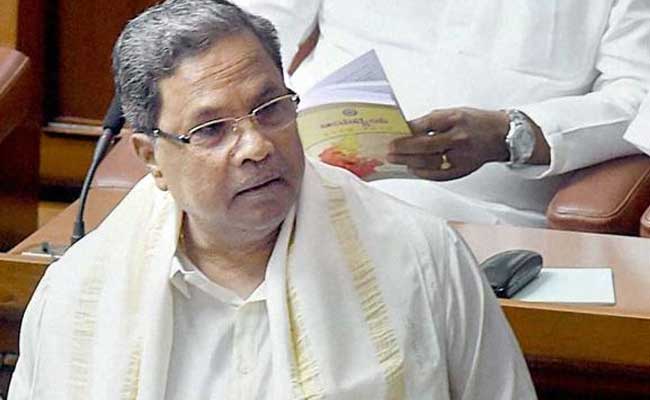 Siddaramaiah alleged that Goa leaders were indulging in mischief. (File)

Bengaluru: Karnataka Chief Minister Siddaramaiah today hit out at Goa's accusation that his state was diverting the water of a Mahadayi tributary into the Malaprabha river basin.

The reaction comes a day after Goa Assembly's Deputy Speaker Michael Lobo levelled the allegation after visiting Kanakumbi at the border of Karnataka and Goa with Speaker Pramod Sawant on Monday.

Alleging that the Goa leaders were indulging in mischief, Mr Siddaramaiah said there was "no violation."

"Let them (Goa leaders) say whatever they want to say but there is a tribunal to decide," Mr Siddaramaiah told reporters in Bengaluru.

"The matter is pending before the tribunal. It will decide whether we have violated its order or not. Just because their deputy speaker says so that does not mean that there was a violation," Mr Siddaramaiah said.

At least 45 TMC ft of water originate in Karnataka, he said.

"Nearly 200 TMC water (in the river) straightaway goes to the sea. All that we are asking for is 7.5 TMC, which the Goa leaders are not ready to share," Mr Siddaramaiah said.

"We have not violated any regulation. No work is going on there as has been projected. Our state respects law and constitution," he clarified.

Mr Lobo has alleged that there was a total diversion of water from Mahadayi tributary at Kanakumbi by Karnataka government by constructing underwater canals.

"Whatever water is flowing down to Goa from there is just seepage," he has alleged, adding if the diversion was not stopped, the Mahadayi in Goa will run dry.

Mr Lobo has said a resolution against it is likely during the Goa Budget session.

Promoted
Listen to the latest songs, only on JioSaavn.com
The Mahadayi Water Dispute Tribunal, which is hearing the dispute between Goa and Karnataka over the sharing of the river water, should be asked to inspect the site at Kanakumbi so that it knows the reality, Mr Lobo said.

The dam at Kanakumbi is one of the projects proposed by Karnataka and opposed by Goa.