"I am taken aback by love people still have for Ambareesh," says late actor's wife Sumalatha

Mandya in Karnataka is turning out to be one of the most heated contests in the second phase of polling to be held on April 18. On one side, there is the candidate for the Congress-Janata Dal Secular coalition, Nikhil Kumaraswamy. He is the son of Chief Minister HD Kumaraswamy and the grandson of former prime minister HD Deve Gowda, making this a prestige seat for the JDS.

Taking him on is Sumalatha Ambareesh, wife of late superstar Ambareesh. She is officially supported by the BJP. And unofficially by several Congress leaders and party workers who were upset that the Congress allowed the JDS to contest the seat.

Nikhil has been attracting huge crowds. He spoke to NDTV in Nagamangala on his campaign vehicle. He was asked about the frequent charges of nepotism and the JDS being a family party.

"I'm sorry. I didn't get this because I am Deve Gowda's grandson, Kumaraswamy's son. I got this because of my eight MLAs, Shivarame's support, three MLCs and the whole of the local leaders who are there with me and who wanted me to contest. It is not my dad or granddad's call," Nikhil said.

The actor, whose third film is to be released soon, claimed he had a good following on the ground. "You media guys are travelling with me since morning, guess you have seen big, large gathering and crowd. I mean this is something I have been witnessing since the whole of eight taluks. It is really good that I am interacting with villages more than towns. Villages are where our party has got most recognition from. The interaction between villages is a new experience for me and I am trying to get to know what the requirements are for the future so that I can talk to the chief minister and all my eight MLAs," Nikhil said.

On his opponent, Sumalatha, he said, "I don't like to talk about my opponent. I want to talk about my development work and what my visions are for the future. If you see all of this election from past 30 days, the media is trying to create a perception that she is very strong and we are weak, but the ground reality is that when I go to the villages, people love us to the core and we are here to serve the people of Mandya region. I don't want to degrade anyone. I respect Sumalatha ji and Ambareesh anna, I am just talking about our development work and my vision for the youth." 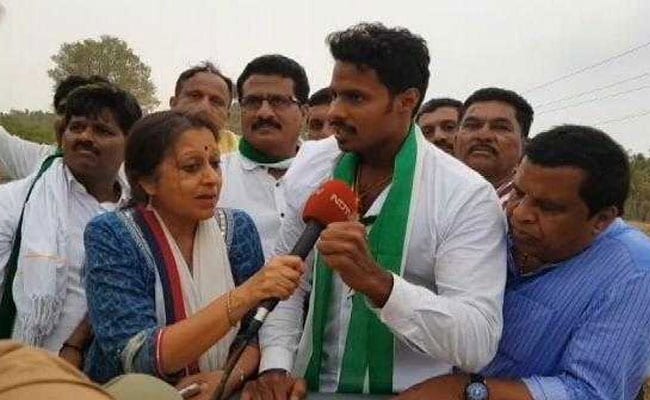 He said Sumalatha was getting some support from JDS coalition partner Congress.

"I am not denying the fact that a few people, Congress people, are not supporting me but being a candidate I have all my responsibility. I am going to their home asking for their support. If they do that, well and good; otherwise, I have my JDS karyakartas, eight MLAs, three MLCs and an MP who is strongly backing me. I am sure I will win," he said, adding Mandya is being well cared for.

"Chief Minister has already given Rs 8,761 crore for development work. I think in the history of Mandya region no one has given more than Rs 500 crore; this is for this year's budget. We have already waived off Rs 12,000 crore (farmers) loans, 15,58,000 families have been waived off and Rs 400 crore loan waivers have come for farmers in Mandya district. I want to concentrate on bringing in smart schools here. I want to make this a pilot in Mandya district and I want to have clear employment opportunity for youth," Nikhil said.

"I see a lot of youngsters driving cabs, working in darshinis in Bangalore for Rs 5,000, Rs 10,000. They have to be given good opportunity. That's my main issue and priority. People will not leave me, I will win," he added.

His opponent Sumalatha's campaign in Nagamangala was low key. She is supported by current day stars of the Kannada film industry like Yash and Darshan and when they are with her the crowds gather. In Nagamangala, however, her convoy was much smaller. Sumalatha is pleased with the response she has received.

"It's been overwhelming," she told NDTV. "The response has been far better than what I thought it would be. In fact, I am taken aback by the kind of love people still have for Ambareesh and that they are extending towards me as well. And the best thing that has happened is that wherever I go, instead of expecting money as they would from any regular politician during elections, they are offering me. They are coming with Rs 20, Rs 50 from the market and saying this is for your election and that is very touching."

The candidate said she was not overwhelmed by the crowds her opponent is drawing. She told NDTV, "I don't see that as an indication of anything more than a party in power. I have the might of the people here with me. I am not intimidated by that at all."

And she also acknowledged support from Congress workers. NDTV saw Congress flags being waved along with BJP ones at her campaign stops - surely the only place where flags of both parties were waved in support of the same candidate.

"I know I have the solid support of Congress leaders with me. If they have the JDS and the Congress leadership that they claim, Congress grass root level workers, BJP workers are with me and the support of the farmers' association. I am not helpless. I have a good support base."

When it came to issues concerning Mandya, she said: "There is a lot of distress, lot of drinking water problem. I think I can be an effective voice in parliament in that fight." She questioned the loan waivers for farmers being given by the state government.

"Well, so they say but when it comes to the ground reality, that is far from what they have claimed. Only Rs 50 crore loans has been waived off but farmer loans are Rs 47,000 crore. The farmers are still receiving notice from banks demanding interest payments, and the banks say they have not got any instruction from the government. Farmers are angry, and they support me," Sumalatha said.

Mandya's biggest issue has been the Cauvery water, and that's collective work. "If I become an MP, I cannot solve that issue in one day but I think I can be an efficient and effective voice towards that," she said.

There have been many references to the recent death of her husband Ambareesh by JDS leaders, questioning why she was contesting and saying her face didn't show sorrow. Her response, "I find that kind of politics very reprehensible. It is disgusting. With all the might they have... they are not satisfied with this so they have to stoop to such low level of politics; it shows how scared they are."

Many women had turned out to see the candidate and some told NDTV, "Sumalatha will win. We are Ambareesh's fans."