The lowest was reported in Raichur with 57.85 per cent, they said, giving the polling percentage, which is expected to slightly go up in the final tally. 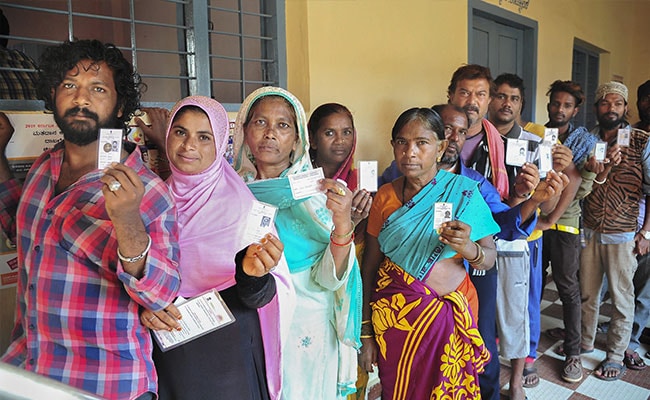 An estimated 67.44 per cent voter turnout was reported tentatively in 14 Lok Sabha constituencies of Karnataka, for which polls were held in the second phase Tuesday, with the Congress-JD(S) alliance and BJP locked in a fierce contest.

The lowest was reported in Raichur with 57.85 per cent, they said, giving the polling percentage, which is expected to slightly go up in the final tally.

The election was by and large peaceful, with no major incident reported, they added.

In Gulbarga, a key constituency where Congress leader in the Lok Sabha, Mallikarjun Kharge, is pitted against Umesh Jadhav of BJP, 58.27 per cent voting has taken place so far.

Voting took place in 28,022 polling stations in the second phase that are mostly in the northern part of the state, covering the entire Hyderabad-Karnataka and Mumbai-Karnataka regions, as also a couple of central districts and coastal Uttara Kannada.

BJP, that has a considerable presence in the region, aims to improve its tally,banking on the "Modi wave" and support of the dominant Lingayat community, considered its vote base.

For the Congress-JD(S) alliance, it is a high stakes battle as their performance is likely to have a bearing on the coalition government in the state.

As Congress sought votes,hoping to cash in on the alleged anti-incumbency against sitting BJP MPs and policies of the Modi government, BJP raised the Lingayat issue, intending to further consolidate the community's votes in its favour, that is already considered as its strong vote base.

BJP accused Congress of trying to divide the community for political gains, pointing at the grand old party's support for demand to accord religious minority status to Lingayats.

The then Congress government's decision to recommend the status to the Lingayat community is said to be one of the reasons for the party's debacle in the May 2018 assembly polls and BJP aimed to capitalize on it, using the issue once again.

Of the 14 constituencies that went to the polls in the second phase, BJP is contesting all the seats.

Congress and JD(S)have fielded their candidates in 12 and two constituencies respectively under their seat sharing arrangement.

While Congress currently has its hold on only four of the 14 seats that went to the polls, BJP has its sitting MPs in 10.

For veteran Congress leader Mr Kharge, a nine-time MLA and two-term Lok Sabha member, who has never tasted electoral defeat, this poll is said to be a tough battle in Gulbarga against Mr Jadhav, who quit as rebel Congress MLA and joined BJP.

In Belgaum, where Congress is hit by dissidence with rebel MLA Ramesh Jarkiholi hinting about quitting the grand old party, 67.24 per cent polling was registered.

Mr Jarkiholi, against whom Congress has moved a disqualification petition to the Speaker, according to reports, had asked his followers to favour BJP during the polls.

He had also stayed away from campaigning and Rahul Gandhi's events in the district recently.

Belgaum, with 57, has the maximum number of candidates, while Raichur, with five, has the lowest in the second as well as the first phase.

In the first phase on April 18, 14 constituencies in the southern part of the state covering old Mysuru region and a couple of coastal districts had gone to the polls, recording an overall voter turnout of 68.81 per cent.