Lawmaker Was "Hijacked", Flight Had Taken Off: Karnataka Congress Leader

Nagesh is now heading to Mumbai, where the lawmakers who resigned have been put up in a five-star hotel. 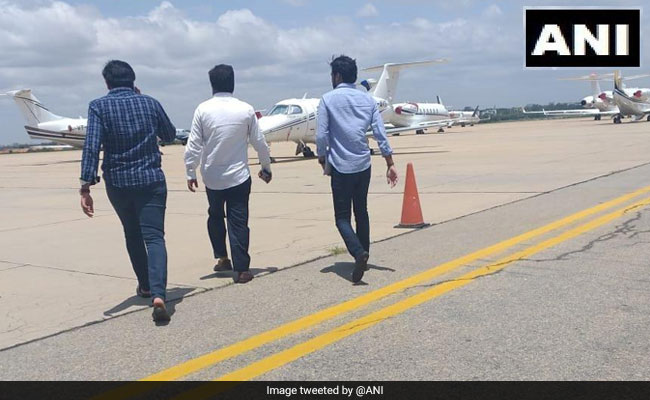 Nagesh (in white) was flown by a special plane to Mumbai

After 13 exits last week, a Karnataka minister who quit the coalition government on Monday may have tipped the balance in favour of the BJP. Independent lawmaker H Nagesh, who had been made a minister just last month in the Congress-Janata Dal Secular coalition's attempts to shore up numbers, pledged his support to the BJP.

H Nagesh was flown by a special plane to Mumbai, where the lawmakers who resigned have been put up in a five-star hotel.

Though he was seen in photos walking calmly to a small aircraft and boarding it, the Congress claimed that Nagesh had been "hijacked" by BJP's Karnataka chief BS Yeddyurappa.

"Just now Mr Nagesh called me and said that he has been hijacked by Mr Yeddyurappas' PA (personal assistant) and BJP. By the time I reached airport the flight had left," Minister DK Shivakumar was quoted as telling news agency ANI.

Mr Shivakumar, the Congress's troubleshooter in Karnataka, has so far held the unofficial job of keeping the flock together and preventing defections at all costs. He has accused Mr Yeddyurappa, a former chief minister, of pulling out all the stops to bring the Congress-JDS government down and seize power.

On Saturday, Mr Shivakumar lost his usual cool and reportedly tore up the resignation letters of Congress lawmakers who quit. So far, he had always been able to stave off such threats with his formidable power of persuasion.

Mr Yeddyurappa has denied allegations that he or his party had a role in the coalition's crisis and the exodus.

The BJP expects the coalition to collapse any time now, after Nagesh's resignation. The party now has 106 lawmakers, the new majority mark in the 224 member state assembly if the 13 previous resignations are accepted. The Congress-Janata Dal Secular will drop to 104.

Chief Minister HD Kumaraswamy, who cut short his private visit to the US and returned last evening, said there is no threat to his government and he did not feel "any anxiety" over the situation. "This is unconstitutional, it is the work of the BJP high command. The government will survive," Mr Kumaraswamy told NDTV.