As the farmers met the Chief Minister, no agreement could be reached; the farmers have decided to go ahead with Karnataka Bandh next week on September 28 (Monday). 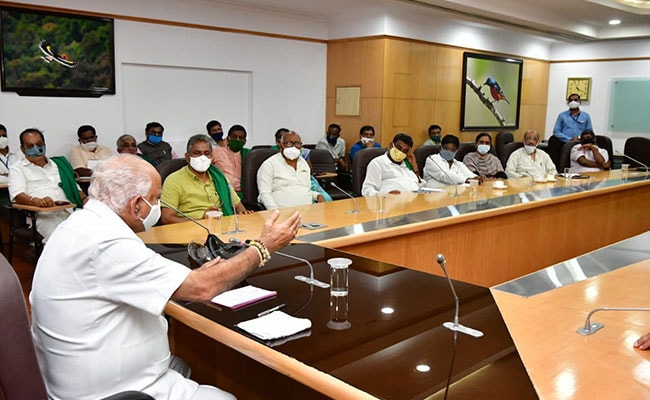 BS Yediyurappa this afternoon met the representatives of the protesters.

Farmers groups protested today in Bengaluru and other parts of Karnataka over the three bills passed in parliament last week and the land reform amendments introduced in the ongoing Karnataka Assembly session. There were protests on Hosur Road on the outskirts of the state capital and also near the Mysore Bank Circle - a common site of agitation.

The Karnataka government is planning to pass the legislation in the ongoing legislature session that will reduce restrictions on the sale of agricultural lands in the state. Earlier, only agriculturalists were allowed to buy land defined as "agricultural land".

The opposition parties in the southern state have criticised this move. Amid protests by farmers, Karnataka Chief Minister BS Yediyurappa this afternoon met the representatives of the protesters on the issue.

Earlier, the Chief Minister had told mediapersons at Vidhana Soudha: "I have asked some of the leaders of the farmers groups to come and meet me in the afternoon. I will have discussions with them. I have said over and over again that only 2 per cent of the land can be used for industrial purpose. Anyone who buys irrigated land will have to use it the same way - as irrigated land. That is a condition. There will be no problem for the farmers. They may have been misinformed."

As the farmers met the Chief Minister, no agreement could be reached; the farmers have decided to go ahead with Karnataka Bandh next week on September 28 (Monday).

Agriculture Minister BC Patil, responding to the protests, said: "There is no question of changing the APMC Act or land reforms Act. Whatever the government has decided to bring Amendments to 79 A,B,C Land Reforms Act and amended APMC Act - we will stick on to this because it is on favour of the farmers and will bring profit to the farmers. I request the farmers association to support this Bill. Now the farmers can sell their goods at their fields. Now there is no penalty for selling outside the APMC yards. I visited all 30 districts and told the farmers about the amendments - we were greeted with claps. Farmers organisations are against this... not the farmers. "

Before the meeting with the Chief Minister, Shanthakumar, state farmer federation president, told NDTV, "Multinational farmers and corporations will rule the farmers (with these Bills.) Today, the Chief Minister has invited us, so we will go and discuss. If government is not in favour of the farmers, we will have a Karnataka Bandh on September 28."

Highways and rail tracks were also blocked today in Punjab, Haryana and parts of Uttar Pradesh by the farmers protesting three new farm bills -  Farmers Produce Trade and Commerce (Promotion and Facilitation) Bill, 2020' Farmers (Empowerment and Protection) Agreement of Price Assurance and the the Essential Commodities (Amendment) Bill. The three bills, which have been called "anti-farmer" by opposition parties, were cleared by parliament last week.

The central government says the new bills are meant to help small and marginal farmers.