In a massive boost for Karnataka's ruling coalition, the Congress won in BJP's beachhead Ballari by a huge margin as votes were counted Tuesday for bypolls in three parliamentary and two assembly seats.

Diwali celebrations erupted a day early for Congress workers as the party's candidate VS Ugrappa surged ahead of his nearest rival, the BJP's V Shantha, in the Ballari Lok Sabha seat, which has voted BJP since 2004 and is the stronghold of the mining barons, the Reddy brothers.

V Shantha, a former parliamentarian, is the sister of BJP leader B Sriramulu, who vacated the constituency to contest the assembly elections in May. 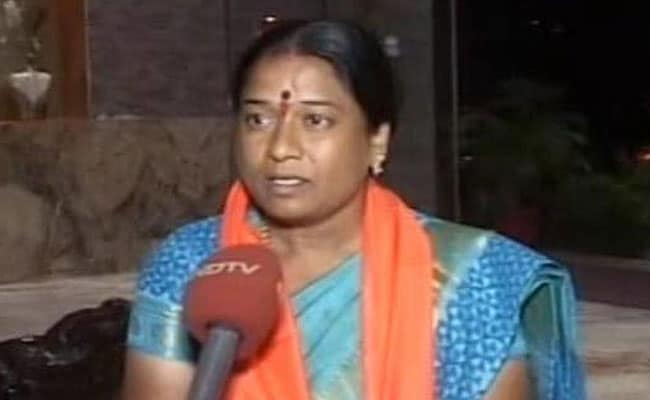 The ruling Congress-Janata Dal Secular (JDS) alliance campaigned hard in this constituency in north Karnataka, encouraged by its performance in the assembly elections; it won six of the eight assembly segments in Ballari. VS Ugrappa is considered an outsider but was strongly backed by Congress leaders Siddaramaiah as well as DK Shivakumar.

But it is his colleague Shivakumar who is seen to have passed a crucial test in Ballari.

Winning back Ballari was Congress's assignment for its troubleshooter Shivakumar, who played a key role in the party's alliance with Chief Minister HD Kumaraswamy's JD(S) and in ensuring that the BJP could not form the government in Karnataka despite winning the most number of seats.

"The democratic process, the peoples mandate is very important. It gives a direction to the people of this country. As far as south India is concerned, the Ram temple cannot be a political plank," said Mr Shivakumar, referring to the BJP and its affiliates amping up a campaign for a temple at the site of the razed Babri mosque in Ayodhya to mark the birthplace of Ram.

"For me, any post is not important... it is the responsibility and the confidence they instill in me that is important," he said.

In 1999, Ballari famously hosted the battle of the giants - Congress leader Sonia Gandhi and BJP leader Sushma Swaraj, now Union Minister. Sonia Gandhi won that round in what had been a Congress stronghold since independence.

The BJP took the seat in the next election and never looked back.

Over the years, Ballari stayed firmly in the grip of Janardhana Reddy and his brothers and their closest aide Sriramulu, the BJP's key man in Karnataka.

Ahead of the 2019 national election, the bypoll results are seen as a test for the Janata Dal Secular-Congress alliance.

The terms for the Ballari, Shivamogga and Mandya seats will be extremely short with the Lok Sabha elections due early next year.