Karnataka Election Results 2018: A good show would be a boost for the ruling Congress-JDS alliance in the state, which is facing questions of longevity. 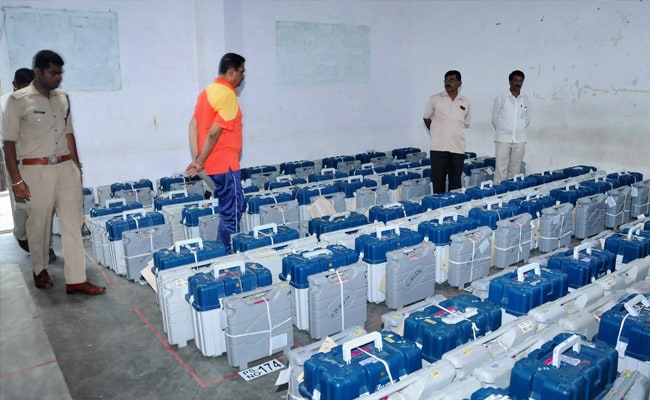 By-Election Results: The BJP won 104 of the 224 seats in the assembly election in May.

The Congress-JDS alliance has won four out of five seats that went to bypolls. The alliance won in Ballari and Mandya parliamentary seats. It also won Jamkhandi and Ramanagara assembly seats. The BJP won the Shivamogga Lok Sabha constituency. Congress leader P Chidambaram has reacted to the alliance's performance, saying the coalition has delivered.

Out of the three parliamentary constituencies, the BJP held two, while the JDS one. The BJP holds Shivamogga, which is a stronghold of its state chief BS Yeddyurappa.

It is a matter of prestige for both the BJP and the ruling Congress-JDS alliance after the assembly election in the state. It was a loss of face for the BJP as the Congress and JDS entered a late alliance to deprive it from forming the government despite being the single largest party. The good performance in bypolls is a boost for the ruling Congress-JDS alliance in the state, which was facing questions of longevity.

In 2014, the BJP had won 17 of Karnataka's 28 parliamentary seats. The Congress won 9 and HD Kumaraswamy's Janata Dal Secular 2 seats. The BJP won 104 of the 224 seats in the assembly election in May.

Here are the highlights on Karnataka By-election 2018 Results:

Encouraged by the Karnataka by-poll results, the Communist Party of India (CPI) Tuesday said a united opposition could easily defeat the BJP, according to news agency Press Trust of India.

The JD(S)-Congress coalition won two of the three Lok Sabha seats and both the Assembly segments Tuesday in the fiercely-fought bypolls, giving a shot in the arm to the ruling combine in Karnataka that faces frequent questions on its longevity.

Welcoming the verdict of the Karnataka by-polls, the Left party said the people of the southern state had made it clear that a united opposition could easily defeat the Bharatiya Janata Party (BJP).

"The Deepawali gift of the Karnataka people makes it clear that a united opposition can easily defeat the BJP," the CPI said in a statement, quoted by PTI.

It added that the huge margins of defeat of the BJP candidates showed the anti-BJP mood of the people, according to PTI.

The CPI has consistently been stressing on state-specific alliances of non-BJP political parties in order to take on the ruling party in the 2019 Lok Sabha polls, according to a PTI report.
Nov 06, 2018 18:40 (IST)

Nov 06, 2018 13:59 (IST)
VS Ugrappa of the Congress has won the Ballari bypoll with a massive margin of 2,43,161 votes. He defeated J Shantha of the BJP.
Nov 06, 2018 13:16 (IST)
LR Shivaramegowda of JDS has won Mandya bypoll by 3,24,943 votes.
Nov 06, 2018 13:14 (IST)
This win is a moral win after the BJP kept claiming that our coalition is not working. BJP always picked on the coalition. People have given their answer. They kept saying all of this was politics. But we have an answer today: HD Kumaraswamy
Nov 06, 2018 13:11 (IST)
There were a lot of people who opposed the alliance and its decisions. If we had prepared properly, we could have won Shivamogga as well: HD Kumaraswamy
Nov 06, 2018 13:05 (IST)
BY Raghavendra of the BJP has won the Shivamogga Lok Sabha bypoll. He defeated JDS candidate S Madhu Bangarappa.
Nov 06, 2018 12:47 (IST)
The BJP doesn't have ethics. And when you don't have ethics, you have no right to accuse or blame others for the lack of it: DK Shivakumar
Nov 06, 2018 12:32 (IST)
People wanted change, people wanted development in Ballari: DK Shivakumar to NDTV
Nov 06, 2018 12:30 (IST)
We had a strategic plan in place from Day 1: DK Shivakumar to NDTV
Nov 06, 2018 12:24 (IST)
I think as far as southern India is concerned, you can't make Ram Mandir and all those issues a political plank. People are looking at what they're going to get, what benefit they're going to get in social and economic sector, administration and transparency: DK Shivakumar
Nov 06, 2018 12:10 (IST)
Congress leader DK Shivakumar, who led the Congress campaign in Ballari,  tweeted, "This Deepavali, I thank the people of Karnataka & especially Bellary for blessing Congress party with this record victory. With support & guidance of Congress President Shri @RahulGandhi & Former PM Shri HD Devegowda, the coalition leaders & workers strived hard to defeat BJP".
Nov 06, 2018 12:09 (IST)
Anand Siddu Nyamagouda of the Congress has won the Jamkhandi assembly constituency, defeating his BJP rival Srikant Kulkarni by a margin of 39,480 votes.
Nov 06, 2018 12:08 (IST)
Anitha Kumaraswamy, wife of Chief Minister HD Kumaraswamy, has won the Ramanagara assembly constituency.
Nov 06, 2018 11:45 (IST)
Congress workers celebrate outside party office in Bengaluru. 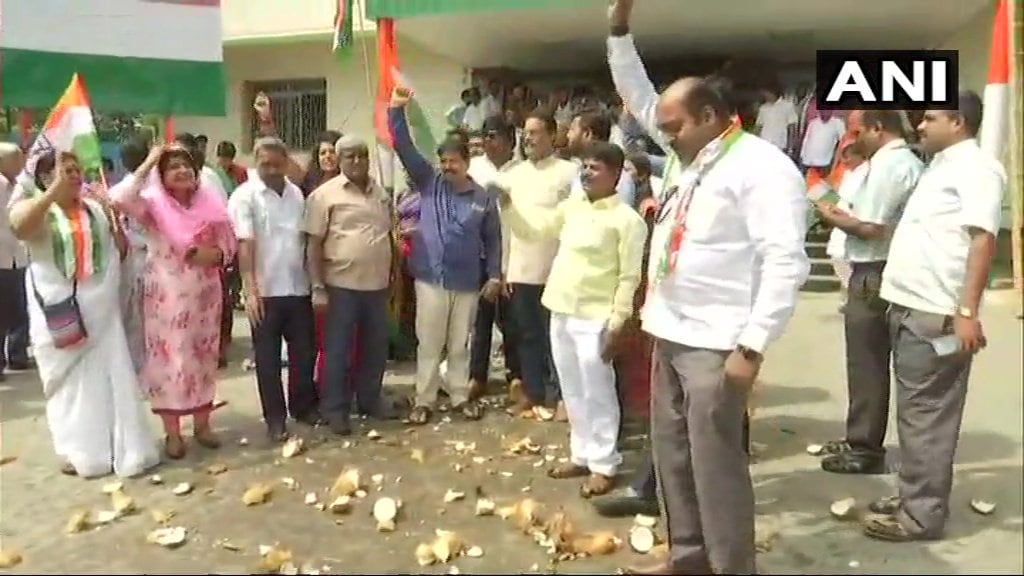 Nov 06, 2018 11:29 (IST)
Congress workers celebrate outside the counting station in Ballari. The Congress candidate has taken a massive lead. 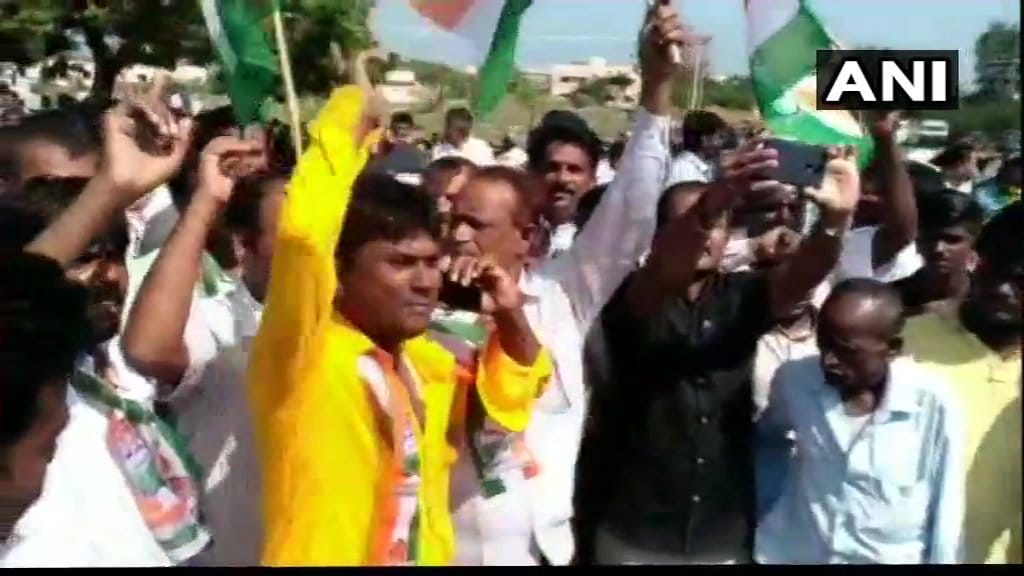 4-1 result (unsure about Shimoga LS) in Karnataka looks like a Test series win under Virat Kohli. Coalition has delivered.

Nov 06, 2018 08:17 (IST)
The fight in Ballari will also be a test for Congress's DK Shivakumar, who played a key role in forming the alliance with HD Kumaraswamy. Mr Shivakumar has overseen the campaign for the Congress candidate.
Nov 06, 2018 08:04 (IST)
Counting of votes in bypolls to three Lok Sabha and two assembly constituencies has begun. 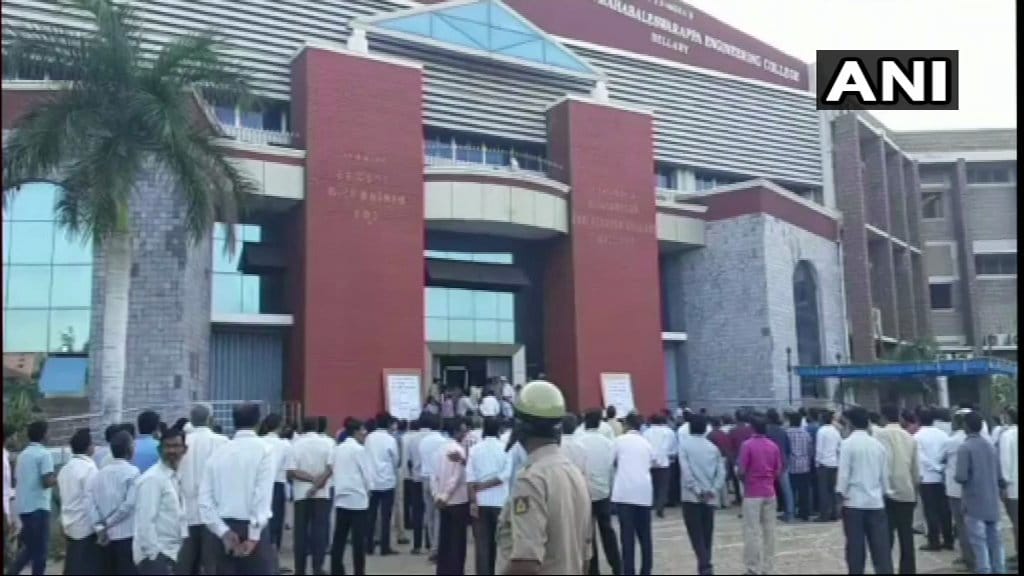 Nov 06, 2018 07:17 (IST)
The contest in Shivamogga is attracting much attention, with sons of three chief ministers battling for the seat that fell vacant after BS Yeddyurappa resigned to contest the assembly elections.
KarnatakaKarnataka Bypoll Results 2018