The HD Deve Gowda-led JDS recently helped the state government pass amendments to a land law in the legislative council, where the Congress and the party outnumber the BJP. 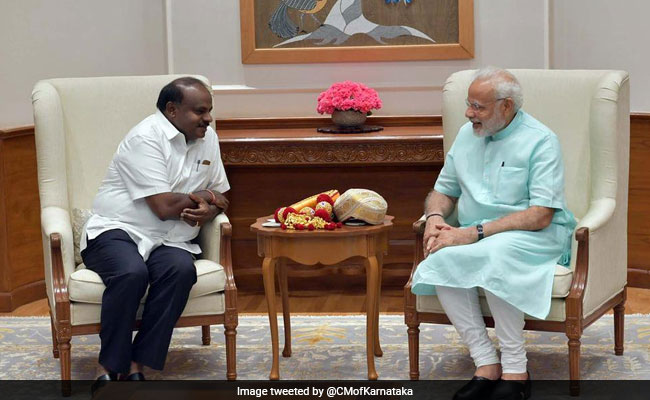 The BJP admits to a "change in dynamics" in Karnataka (File)

Best wishes to former Karnataka Chief Minister Shri @hd_kumaraswamy Ji on his birthday. May Almighty bless him with a long life, filled with the best health.

The HD Deve Gowda-led JDS recently helped the state government pass amendments to a land law in the legislative council, where the Congress and the party outnumber the BJP. The Congress alleged that the support of its former ally to its main rival BJP was a clear sign of the JDS' drift towards the ruling party.

Speculation of the growing closeness between the two parties gained strength earlier this week when the BJP wanted to move a no-confidence motion against the legislative council chairperson - Prabhat Chandra Shetty of the Congress. The motion pending, the BJP said, he had no right to occupy the chair. Later, the council's deputy speaker, Dharmegowda of the JDS, tried to run the house but was forcibly removed by the Congress MLCs, showing a widening rift between the former allies.

In a series of angry tweets against what happened in the council, former Congress chief minister, Siddaramaiah, had alleged a BJP-JDS nexus.

"Today's conspiracy in the Legislative Council is the joint act of BJP and JDS members. This has exposed the BJP-JDS secret alliance. Leaders of both parties should apologize to the people of Karnataka," he had written.

Congress MLC and spokesperson, Prakash Rathod, was in the council that day. "JDS of late has become close to the BJP - it is a known fact. JDS is like a chameleon. It changes colour with the party in power. Today, BJP is in power. They probably want to get benefits from the BJP government. The true colours of the JDS are exposed - they are aligning with a communal party," he told NDTV.

There are others signs of the two parties – ideologically opposite – getting close. HD Kumaraswamy, who was the Chief Minister during the Congress-JDS regime, recently spoke of regretting his tie-up with the Sonia Gandhi-led party.

The BJP admits to a "change in dynamics".

"The dynamics are definitely changing, particularly the Janata Dal Secular - from my perception. They had a very bad experience while running a government with the Congress… So far there has not been a clear-cut approach (on alliance). Here and there we have shared some of the common aspects. Let us see in the future how it is going to shape up," Dr Ashwath Narayan, the Deputy Chief Minister, said.

R Ashok, the Revenue Minister, said: "Naturally, BJP is doing good work so for the good cause they are supporting BJP.

There is, however, one important matter on which the JDS does not see eye to eye with the BJP. The ruling party would need the support of the JDS to get the cow protection bill through in the council, but the JDS has spoken firmly against it.

"Though the Karnataka Prevention of Slaughter and Preservation of Cattle Bill 2020 which was introduced and adopted in the Karnataka Assembly in a tearing hurry appears to be an attempt to protect cattle, in the long run it is bound to affect cattle," Mr Kumaraswamy had tweeted.

The JDS says that the support to the BJP is limited to the council.

"We have promised to the BJP to make coalition in the council. Only council, not other issues. In future what will happen -- I don't know. We are going to support the (council) speaker election, only at the council. That is all. On issue basis we will give support to the BJP. In cow bill -- we are supporting the Congress," Dr TA Sharavana, a party spokesperson, told NDTV.