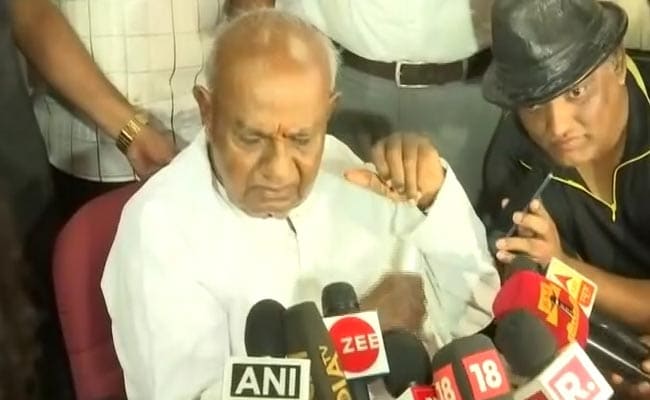 Siddaramaiah is spreading the word that I will support the BJP, said HD Deve Gowda

New Delhi: A day after Prime Minister Narendra Modi's public praise, JD(S) chief HD Deve Gowda sought to play down the remarks, insisting that it was no indication of any "understanding" between the two parties for the Karnataka assembly elections.

"Maybe, by praising me, he (PM Modi) wants to gain sympathy. That is all. That does not mean there is an understanding (between BJP and JDS)," said Mr Gowda, according to news agency PTI.

But the former prime minister seemed to endorse PM Modi's criticism that the Congress party and its boss Rahul Gandhi had insulted him.

Earlier, Rahul Gandhi had called Mr Gowda's party the "B team" of the BJP. "The JD(S) is now Janata Dal (Sangh Parivar)," Mr Gandhi had said at an election rally in March.

Addressing a public gathering in Udupi on Tuesday, PM Modi had described Mr Gowda as one of the "tallest leaders for whom I have respect". In the same breath, he had castigated the Congress chief for insulting a veteran like Mr Gowda.

PM Modi's remarks were seen as a rapprochement of sorts by the BJP should the assembly polls throw up a hung verdict, in which case the JD(S) will play the kingmaker.

The prime minister's eulogy gave fresh ammunition to the Congress to drive home the point made by Mr Gandhi. Chief Minister Siddaramaiah was quick to remind PM Modi of his remarks made in 2014 on the campaign trail for the general elections.

"PM has suddenly discovered love & respect for Shri HD Deve Gowda. Shri Modi had not long ago said he will send Shri Deve Gowda to a retirement home. Is this new love a sign of the not so secret understanding between BJP & JDS?" tweeted Siddaramaiah.

Mr Gowda was quick to hit back at the chief minister. "He wanted to be the chief minister with the support of BJP when he was in my party in 2004. I said no. Now, Siddaramaiah is spreading that I will support BJP," Mr Gowda told reporters, according to PTI.

Promoted
Listen to the latest songs, only on JioSaavn.com
In 2005, Mr Gowda's son HD Kumaraswamy brought down his party's coalition government with the Congress and became chief minister by teaming up with the BJP. Mr Siddaramaiah who was then with the JD(S) quit the party and joined the Congress.

The JD(S) chief made it clear his party would form the next government in Karnataka without tying up with either the Congress or the BJP.