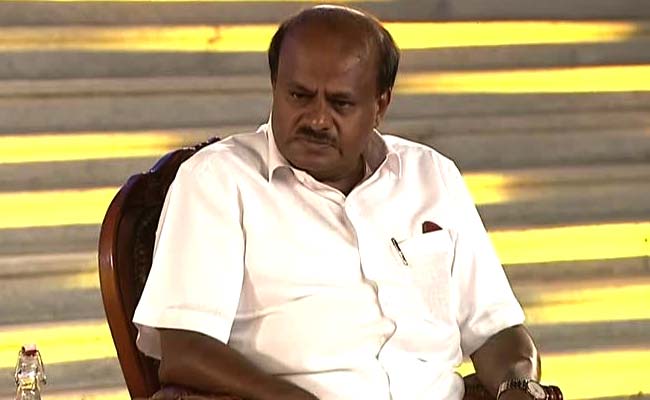 HD Kumaraswamy said that attempts were made by Income Tax officials to raid his son's hotel room.

Karnataka Chief Minister HD Kumaraswamy is in the crosshairs of the Income Tax department, with the agency alleging in a complaint to election authorities that he has broken his oath of office by alerting financial offenders in the state to impending raids.

The four-page complaint, dated March 30, alleges that "Chief Minister HD Kumaraswamy as well as other ministers and prominent leaders of the ruling coalition posed a threat to Income Tax officials by protesting at its Bengaluru headquarters against raids undertaken on contractors and other tax offenders". It further sought a CRPF contingent for assistance in search operations as well as follow-up actions.

Referring to a statement issued on March 27, a day ahead of the Income Tax raids, Mr Balakrishnan alleged that the Chief Minister had "broken his oath of office by alerting tax evaders". The raids, conducted on the residences of government contractors and engineers in Mysuru, Mandya and Hassan, yielded jewellery as well as cash amounting to Rs 2.11 crore.

Mr Kumaraswamy has claimed that he is being targeted by the Income Tax department as well as the Election Commission, with investigators regularly waylaying his vehicle to conduct searches. He also alleged that attempts were made by Income Tax officials to raid his son Nikhil Gowda's hotel room in Mandya. "Where are they going with all these raids? Why do they stoop so low in politics?" the Chief Minister asked.

Nikhil Gowda is the Congress-Janata Dal (United) candidate from Mandya.

Karnataka Pradesh Congress Committee president Dinesh Gundu Rao said that the Income Tax department's credibility has received a blow, given how Mr Balakrishnan was "acting on the instructions of a political party".