About 4,000 women from across Karnataka have been marching for days, demanding a complete ban on production and sale of alcohol.

"We will not go away until the government bans alcohol," the women said.

They came in thousands, from their villages in north Karnataka, walking all the way to Bengaluru. Wearing traditional saris, women who have suffered due to alcohol abuse by family members, made the long journey of over 200 km on foot to ask the state government to ban alcohol.

Wednesday morning, the women gathered in Malleswaram in the capital city. Ambika, a young woman from Ballari, now a part of the campaign said she had been regularly beaten by her drunken husband. She told NDTV."I have been suffering at the hands of my husband. He drinks every day, he is violent to me and keeps threatening me. I am dying as I live."

Swarna Bhat, one of the chief organisers of the march told NDTV that about 4,000 women from all over Karnataka participated in the march. "We want complete prohibition - of production, sale and consumption of alcohol. Not a single politician has come to see us. This is disrespect to this big women's protest."

The women did get support from some prominent citizens in Bengaluru. Freedom fighter, HS Doreswamy, 100, makes it a point to support many social causes - and he was there to speak to the women. Theatre personality and actor, Arundhati Nag, was also deeply impressed by the spirit of the rural women. She told NDTV,"I think this just shows us how impotent urban women are. We take so long to react. Look at them. What must the pain of these thousands of women be that they have left their homes ten days ago, come walking and eating just two meals a day, sleeping in grounds. They are not going to have an easy time when they get back home. Their husbands are not going to spare them. But they have come out. It shakes you up." 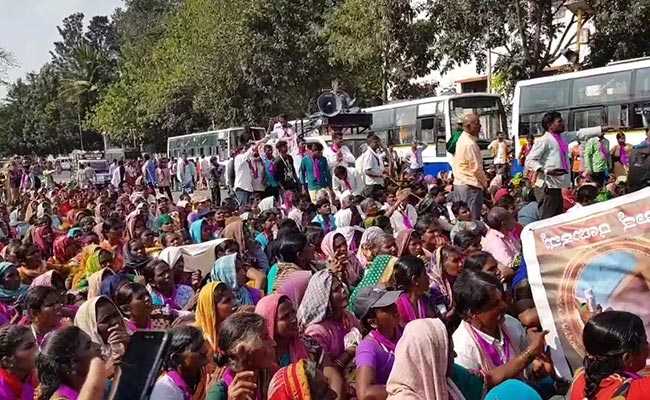 The protestors have complained that no political leader has come to see them.

"This is a groundswell I hope. We can put some wind in their sails and make the government realise that this is a social problem. It is not about taxes or political will. India will become poorer if we allow this to continue. There is no money for food, for education."

Theatre personality, Prasanna, said, "We are all looking at drinking as a problem of law and order. It is a human tragedy. It is killing and destroying villagers. Every one of these women carries a story of immense tragedy. I walked with them for the last 4 days. Every one of them has tears in her eyes. I don't care what taxes you lose, I don't care what law you can't make. Please respond to this great tragedy."

Activist Madhu Bhushan also took part in this march. "Everyone is deaf," she said, "starting with the state and the government. There are 3000 to 4000 women who have marched down for 10 days. Not a single poltician has responded. If this doesn't way heavily on their conscience, I don't know what will."

When we asked if prohibition really worked, Prasanna said, "We have tried half-heartedly. It has to be tried by political parties, establishment and by society. We all have to come together. On one side we need a law - on the other side, society has to wake up."

One of the women, 60-year-old Renukamma died after being hit by a motorbike during the march. The Raitha Sangha wants to erect a hero stone (veeragallu) as a tribute to her.

As they left Malleswaram to try and get closer to the Chief Minister and Vidhana Soudha, the column of women made for a dramatic sight on Bengaluru roads. One of the women said, "Women are widowed when they are young (because of alcohol). Prohibition has to be introduced by Kumaraswamy - and until he does that we will not go away." One of the women said if the government does not bring in prohibition, they will not vote."

Asked about prohibition, Yenkamma, one of the women said, "It has to happen. It will happen. Our lives have been destroyed. We are in tears. Kumaraswamy has to do this. We have walked all this way, our children are orphaned. We will be here until prohibition is introduced."