At a press meet on Thursday, the Congress attacked the government on other purchases too and said they wanted an inquiry headed by a sitting judge. 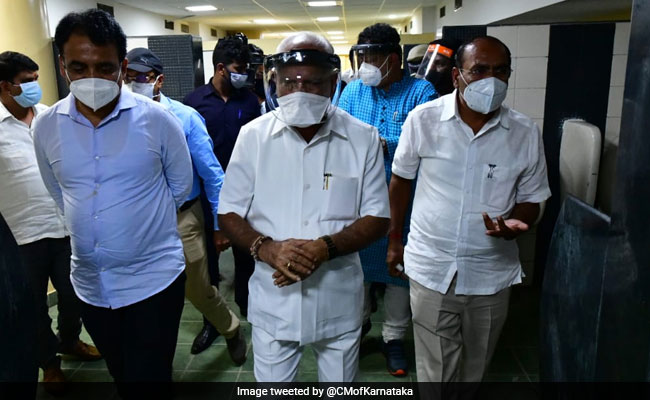 BS Yediyurappa government has been accused of misappropriation of funds by the Congress.

Amid a surge in coronavirus cases in Karnataka, which is the fourth worst-hit in the country by the pandemic, the Congress has demanded a judicial probe into the buying of medical supplies by the state government.

The Congress has alleged that too much money was spent on the PPEs (Personal Protective equipment) and other medical equipment. By renting instead of buying the equipment at a massive Covid Care Centre, the state was wasting the tax-payers' money, the party said.

The state later decided to buy the equipment instead of renting it at Rs 800 per bed per day. The party also hit out at the out at the BS Yediyurappa government over the procurement of the ventilators in the state, which has logged over 75,000 cases so far.

In a series of tweets, former chief minister Siddaramaiah this afternoon
criticised the Chief Minister, stressing that he has written 20 letters to but hasn't got a reply. "Misappropriation by @CMofKarnataka & his minsters is more than Rs 2,000 Cr. Inhumane act at a time of pandemic distress.There should a judicial enquiry by a sitting high court judge and there should a discussion in the assembly (sic)," he wrote in a tweet.

Misappropriation by @CMofKarnataka & his minsters is more than ₹2,000 Cr. Inhumane act at a time of pandemic distress.

There should a judicial enquiry by a sitting high court judge and there should a discussion in the assembly.
1/n#LekkaKodipic.twitter.com/BBvSjHCVaM

He also hit out at Prime Minister Narendra Modi. "Total cases in India have exceeded 12 lakh with 28,732 deaths. In Ktaka, total cases are 71,069 with 1,469 deaths. Both @PMOIndia  & @CMofKarnataka have miserably failed in containing the spread. They have not travelled anywhere to assess the preparedness," another tweet read.

"On one hand @PMOIndia advocates Aatma Nirbhar Bharat but here in Karnataka, his own Chief Minister @BSYBJP, has procured hundreds of crores worth Made in China medical equipments at exhorbitant price. Is this not hypocrisy? (sic)" the senior Congress leader tweeted, as he accused the state government of not revealing the details of the purchase of medical supplies publicly.

Lakhs of migrants had to suffer to go back home & even to afford a single meal during lockdown. Many died during reverse migration.
Supreme court & high courts have condemned the govts.

Dy CM @drashwathcn & @DHFWKA minister @sriramulubjp, in the press conf, claimed that only ₹324 Cr worth medical essentials were procured by health dept.

The details given by them were limited to health dept & also only for those where payments were completed.

They are yet to give details of all the procurement orders of health dept, which includes pending payment orders. They have not given any details of procurement from other departments. This is worth more than ₹4,000Cr. People have the right to know even those.

I have written more than 20 letters to @CMofKarnataka, Chief Secretary of Karnataka & others. But I have not received any reply from anyone. Instead, @CMofKarnataka is misleading people through rhetoric statements.

"Prime Minister's Office has procured ventilators at Rs 4 lakh per unit under PM Cares. But only in our state, the ventilators are procured at Rs 12-Rs 18 lakh per unit. Why do we see such a huge difference in price? Ministers, in the press conference, have told that quality and technological capabilities are the reasons for huge price difference. Does it mean ventilators under PM Cares lack quality? Why did they not present the technical specifications to justify the same?" the 71-year-old politician asked.

Health Minister B Sriramulu has denied all the allegations of corruption. He told reporters: "If there is found to be corruption of even one rupee, then I will not sit in this chair for even one moment - I will resign in a minute and go. You (Siddaramiah) will at least tell a lie that people can believe."

Deputy Chief Minister Ashwath Narayan defended the quality of the PM Cares ventilators. He told NDTV: "We should be happy and proud and feel patriotic that we have started manufacturing ventilators. So far we have been importing ventilators from different countries. We are trying to find fault with everything."

"It is good quality developed within a few days. Scope for improvement is always there since it has been developed locally, manufactured in Karnataka in BEL factory. Support services are available next door. We will be in a position to supply to the world... PPEs, sanitisers, N-95, ventilators. We should be proud instead of trying to find fault. It is not in good taste," he said.

"We did not have big numbers earlier. Requirement of ventilators did increase - so the state and central government started manufacture of ventilator to address these concerns as we could not import as other counties needed them themselves. The central government has assured us of 1,600 ventilators. We already have been supplied 650. The state government has procured more than 300. We are in the process of installation. I think all the requirements will be addressed," Mr Narayan added.

At a press meet on Thursday, Siddaramaiah said, "I made some allegations. Mr Ashwath Narayan and Mr Sriramulu denied my allegations totally. I have documents to prove misappropriation. Ventilators, thermal scanners, PPE kits, oxygen testing - in all these things there is misappropriation. They say they have spent Rs 324 crore. According to me they have spent over Rs 4000 crore of which Rs 2000 crore is misappropriated. Please constitute a judicial inquiry with a sitting High Court judge. "

Karnataka Pradesh Congress Committee chief D K Shivakumar said, "When other states are purchasing at different rates - it is not a small difference. You have eaten everything, you have swindled - and then you want officers to reply. You want to make money in this? You don't have heart? The image of Karnataka is in a shambles."