In terms of numbers, winning the RR Nagar and Sira (the other seat being filled) makes little difference either way, as the BJP holds a strong majority in the House 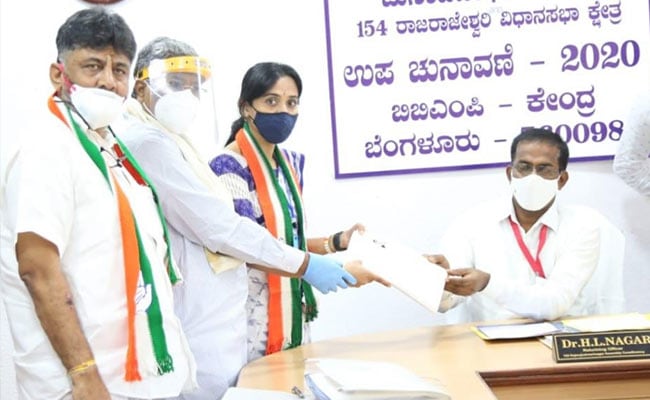 Bypolls to Bengaluru's RR Nagar Assembly seat will be held on November 3. The seat has been vacant since the sitting MLA, N Munirathna, was disqualified under the anti-defection law last year after crossing from the Congress to the BJP.

On Wednesday candidates from Karnataka's three main political parties filed their nominations, including Mr Munirathna, who said he was "very happy" and "had a debt" to pay to the people of the neighbourhood.

"I am very happy - I don't even know how to express it. I have a debt to the people of RR Nagar which I will repay. People of RR Nagar vote for development. That is the only "wave"," Mr Munirathna said after filing his nomination papers.

The BJP candidate was accompanied by Deputy Chief Minister Dr Ashwath Narayan, who told NDTV "the entire constituency is entirely favouring our party".

"Our candidate Shri Munirathna was earlier elected from the same constituency. He is having a good level of popularity and acceptability in RR Nagar. We are very confident that we are going to win this election hands down," Dr Narayan said.

"I don't think there is any resistance from the opposition. They were searching for a candidate. They were not able to get one - they probably managed to get some candidate. We are in a very good position. We are going to do extremely well. I think the margin is going to double," he added.

The Congress is fielding Kusuma H, the wife of IAS officer Ravi - who made headlines after his death by suspected suicide in 2015. Former Chief Minister Siddaramaiah, who accompanied the candidate, said he was confident his party's candidate would win.

"I am 100 per cent confident our candidate, Smt Kusuma, will win this by-election because in the last two elections also Congress candidate has won," he said.

"Munirathna was a Congress candidate. Because he joined BJP doesn't mean the voters will follow. We have fielded a strong candidate and an educated woman," he said.

Meanwhile, the Janata Dal Secular - the Congress's former coalition partner - has its own candidate, V Krishnamurthy, and another former Chief Minister, HD Kumaraswamy, was there to support him.

Referring to the dramatic crossing-over of Congress and JDS MLAs to the BJP, which triggered the fall of the coalition government, and the December bypolls for those seats, he said: "By-poll is very prestigious for all parties because in the previous election the BJP did very well. We have to give the right message to my party workers. We are fighting this election on development issues," he said.

In terms of numbers, winning (the) RR Nagar and Sira (the other seat being filled) makes little difference either way. The BJP has a strong majority that will not be affected if either of the opposition parties claim these seats.