Home Minister Basavaraj Bommai said over 300 people have been arrested so far over the violence but denied that innocent people were being rounded up from the area. 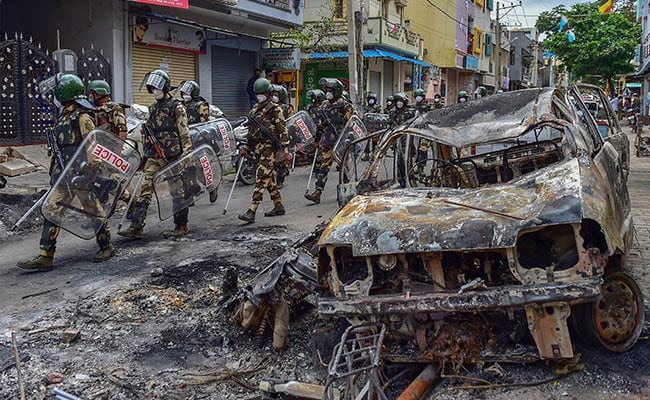 Flag marches have been held in the two areas hit by violence - KG Halli and DJ Halli.

Animosity within the Congress played a role in last week's violence in Bengaluru, Karnataka Home Minister Basavaraj Bommai said on Tuesday, also blaming the Social Democratic Party India, the political unit of the Popular Front of India. Speaking to NDTV, Mr Bommai said the social media post - found offensive by many Muslims and believed to have triggered the violence - was just the spark.

"It has come out from Congress circles only. We have heard certain Congress leaders discussing discontent in the Congress and animosity towards the MLA Akhanda Srinivas Murthy. All these things have added up. Ultimately one Facebook thing was just a spark. Behind that there was a lot of ammunition of discontentment and that has triggered the violence," he said in response to a question on his party's charges against the Congress.

Mr Murthy's home and a police station were set on fire by those protesting the social media post by the MLA's nephew.

"There was a discontented element there in that area. There was political discontent and political rivalry there for domination of the constituency. It has been triggered through quest for political dominance. The SDPI has taken advantage of it. They have done very well planned violence. We are looking into all these angles," Mr Bommai told NDTV.

He said authorities were gathering the necessary evidence to enforce a ban on SDPI and also PFI.

"SDPI is the political front of PFI which was originally SIMI (Students Islamic Movement of India). There is a history for this," he said.

"We are looking into this entire history and metamorphosis. Some issues are amorphous. They have linkages with other organisations across the state and across the borders of the country also," Mr Bommai said.

He said the allegations and investigation against the SDPI was not recent. "Looking into the history, there has been continuous violence by these organisations in different parts of the state, on different occasions," he said.

The Congress, however, has denied any involvement, with former Chief Minister Siddaramaiah tweeting, "Instead of identifying the actual culprits, @BJP4Karnataka leaders are more interested in targetting Congress party. They see politics in all crisis."

The home minister said over 300 people have been arrested so far over the violence but denied that innocent people were being rounded up from the area.

Three people died in police firing during the violence last Tuesday. Another arrested man, found to be coronavirus positive, later died in hospital of injuries received that were not due to bullets. Flag marches have been held in the two areas hit by violence - KG Halli and DJ Halli - in the east of Bengaluru where large gatherings remain banned.