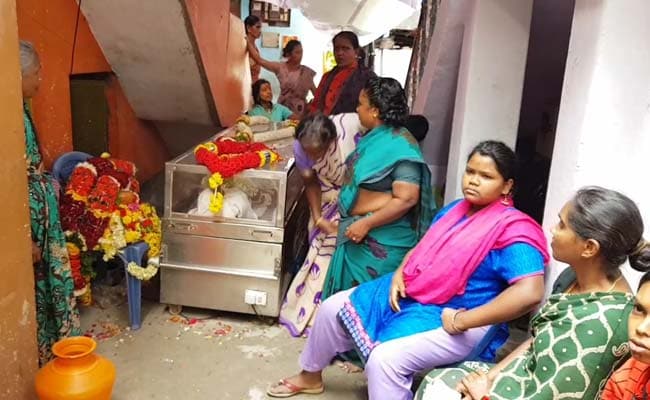 Subramani, 40, drank poison and he was declared brought dead at a government hospital.

The suicide of a sanitation worker in Bengaluru is being linked by his family and co-workers with the delay in payments to sanitation staff by the city corporation, the Bruhat Bengaluru Mahanagara Palike (BBMP). Subramani, 40, drank poison on Monday. He was declared brought dead at a government hospital.

Subramani was employed with the BBMP, and had not been paid for months. His wife, Kavitha, says financial difficulties forced him to take his life. He had also written a letter to Congress leaders about the salary issue. The police have registered a case of unnatural death.

Kavitha told NDTV, "He hadn't got his salary since January. Last year, they gave him 12,000 rupees and there was no payment after that. When he went to ask for it, he was treated badly. That is why he did this."

The couple has two children and Kavitha says Subramani had a loan of over two lakhs.

"Nobody should go the way my husband did. Their wives and children should not face this. He was the only one for me and I had faith in him. Now he has left me and my children and I are all alone."

His death led to protests outside the BBMP office.

Adilakshmi, a santiation worker, told NDTV, "We haven't got our salaries for the last eight months. We don't have any money to pay school fee or house rent."

The BBMP has announced that it will release Rs 27 crore for pending salaries.

Sarfaraz Khan, Joint Commissioner of the BBMP, told NDTV, "He had joined us about six months ago as a pourakarmika (sanitation worker). Actually, even the unions have said the people who have worked for less than a year, are not genuine pourakarmikas. Only those who have records that they have been working for more than one year are the genuine pourakarmikas. So the people who have worked for 3-4 months and our people have made them work, the Commissioner has made the decision to make their salary payment and then they can be relieved. In his letter, he said he had been working as an auto-helper, previously. And then also as a pourakarmika. But one person cannot be working in both the places. So, that also has to be verified."

The BBMP, which is run by the Congress, and the JDS are giving a compensation of Rs 10 lakh to Kavitha and have promised her a job.

The BJP has taken up the issue and held a protest in the city. BJP lawmaker Ashwath Narayan, said, "The death of the pourakarmika because of the non-payment of the salary for six months though the BBMP's expenditure has doubled. They used to make the statements in Council that we are paying the salary. At least now the system should wake up and action be taken against the persons concerned. Justice should be given to the person who has committed suicide."

The Mayor of Bengaluru, Sampath Raj, said it was an issue of confusion over payments. "16,000 people are getting direct payment of 12000 every month. But we got a list of 36,000 people. Many officers suspected it to be fake. After inquiry it came down to 16,000. Whoever has worked less than one year can't be considered. This particular person who lost his life was working as a gangman, and six months ago he came into the roll. Officers said less than 6 months cannot be considered."