All Is Well, Says Karnataka Congress After Legislative Party Meeting

Among the missing - with no clear explanation of their absence - were Ramesh Jarkiholi and Roshan Baig. 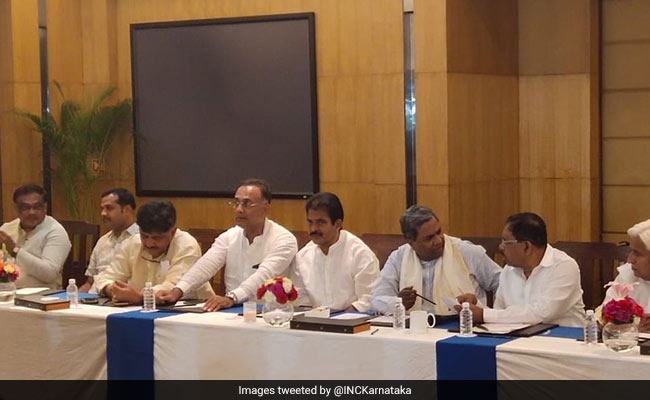 The meeting was also attended by state in charge, KC Venugopal among others.

The Karnataka Congress Legislature Party meeting called on Wednesday evening in Bengaluru saw almost all of the party's 79 lawmakers in attendance.

Among the missing - with no clear explanation of their absence - were Ramesh Jarkiholi and Roshan Baig. These two lawmakers have distanced themselves from the party in recent times and were expected to miss the meet. But the Congress would feel it has got off lightly.

The party has been anxious about departures following the disastrous performance in the Lok Sabha elections - where it one only one seat in Karnataka.

CLP leader and former chief minister, Siddaramaiah, told NDTV after the meeting, "72 out of the 79 MLAs were here. Those who weren't had good explanations. "When we asked in particular about Roshan Baig and Ramesh Jarkiholi, Mr Siddaramaiah said they had not come or explained their absence." 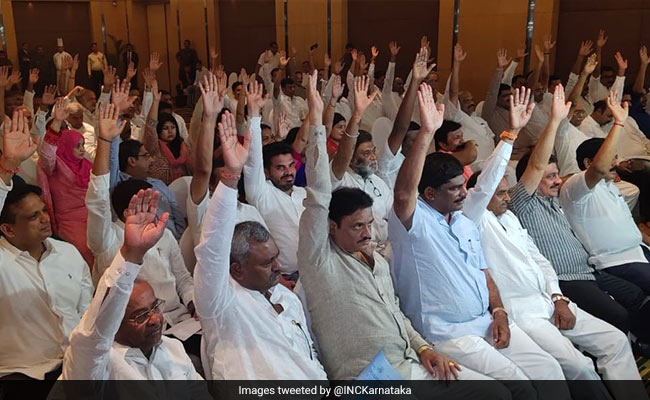 The former chief minister insisted that there was no threat to the coalition government. On state BJP chief BS Yeddyurappa saying the government would fall, he said, "Yeddyurappa has been saying that for one year now."

There has been speculation of a cabinet expansion and reshuffle to keep the rebels happy and with the Congress. But Mr Siddaramaiah said, "No expansion for now."

The meeting was also attended by state in charge, KC Venugopal and other Congress leaders - including the sole Lok Sabha MP from the state - DK Suresh.

The meeting had been seen as a crucial test of just how united the Congress was in the state - and whether along with the Janata Dal Secular it could hold on to coalition state government.

The alliance has been hit by the victory march of the BJP, winning only two of the Karnataka's state's 28 seats and is currently bracing for what it expects to be a huge BJP effort to poach on its lawmakers.

Internal bickering, on between the local leaders of the two parties since the coalition was formed, has also grown since the since the election rout.

Earlier in the day, chief minister HD Kumaraswamy had met the Congress leaders.

More meetings are expected to be held on the political situation on Thursday.

At the meet, the CLP also passed a unanimous resolution asking Rahul Gandhi to not resign as Congress president.

Mr Gandhi has been adamant about his decision to step down from the post after the party's decimation by the BJP in the Lok Sabha election. The Congress has repeatedly refused to accept this decision and the impasse has been continuing since Saturday, when Mr Gandhi announced his intention at a meeting of the party's Working Committee.