Encourage Youth To Be 'Job-Giver' And Not 'Job-Seeker': President Ram Nath Kovind

The President called upon to impart skill training to empower and encourage enterprising youth. 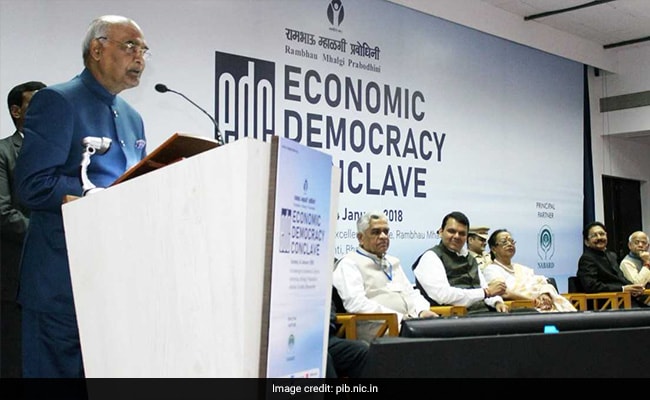 The President was addressing 'Economic Democracy Conclave' at Thane

The president shared his memories about his association with the Rambhau Mhalgi Prabodhini and praised its values of discipline, dutifulness, commitment and work culture.

The President also highlighted that the Mumbai, the financial capital and surrounding region host number of opportunities for all ranging from self-employed vendor to corporate industrialist.

He appealed to all youth that they should play role in development of society and economy by utilising these opportunities. He further congratulated the institute for taking up this initiative and extended his best wishes.

The President acknowledged, as voter awareness is done for building political democracy, similarly, there is also need to inform and inspire people of their socio political rights, policies and opportunities, particularly for the marginalised section of the society.

The President called upon to impart skill training to empower and encourage enterprising youth.

"Such young entrepreneurs are being supported by Prabodhini and DICCI (Dalit Indian Chamber of commerce & Industry) like institutions, also Private sector industrialists like TATA Group have extended opportunities," he added.

He expressed confidence that youth shall make best of opportunities created through government programmes and non-government facilities through NGOs, NBFCs, Media and they turn up to self-employment as a matter of choice, becoming 'job-giver' than job-seeker'.