Union Minister Smriti Irani said that the Centre will skill 30,000 people in Meghalaya under the 'Samarth' scheme in apparel, textiles and handloom sectors. 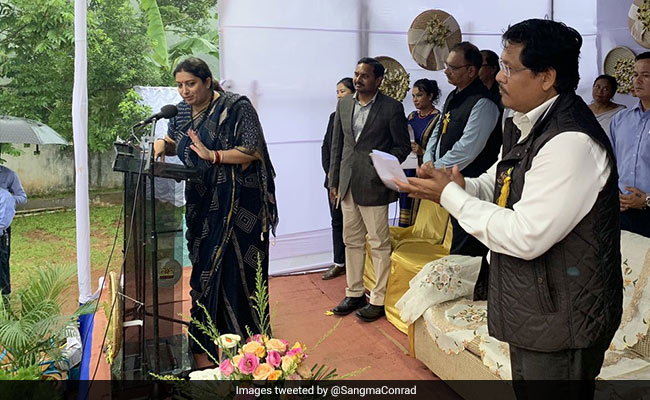 Union Minister Smriti Irani Monday said that the Centre will skill 30,000 people in Meghalaya under the 'Samarth' scheme in apparel, textiles and handloom sectors.

Irani, who is the union minister for textiles, said that it is the direction of Prime Minister Narendra Modi to skill the people of Meghalaya so that 54,000 crafts persons in the state get benefits from and are aided by the Centre.

The number of people to be skilled has been increased from 7,200, which was decided upon earlier, as the Centre is committed to supplement Meghalaya government's endeavours for development in the textiles sector, Irani said laying the foundation stone of the Integrated Textiles Tourism complex at Nongpoh in Ri-Bhoi district.

The Samarth scheme - 2018 launched by the Centre under the supervision of the textiles ministry is focused on offering employees employment opportunities and training in the textiles sector. Under this scheme the central government aims at provide skill development training programme to over10 lakh selected youths . The complex and its activities are being funded by the Centre so that the art of Meghalaya prospers, she said.

Irani also visited the upcoming National Institute of Fashion Technology campus here and said that the work on it be completed soon as Prime Minister Narendra Modi is likely to inaugurate it in November.

I must compliment that the Shillong NIFT has one of the most beautiful NIFT campuses in the country, she said.

She reviewed the implementation of Poshan Abhiyan and the preparation for the Poshan month to be observed in September.

The government has set a target to connect 44 crore people during the Poshan month.

The Poshan Abhiyaan was launched by the Centre in 2018 to reduce low birth weight, stunting, under-nutrition, anaemia among children, adolescent girls and women. She appreciated Meghalaya Chief Minister Conrad Sangma for the steps taken by his government relating to women and child development.

The union minister also interacted with the children and Anganwadi Workers at the Umdihar village (also in Ri Bhoi district).

(Except for the headline, this story has not been edited by NDTV staff and is published from a syndicated feed.)
Comments
Smriti IraniSkill development