He said his government had recognised the talent of the candidates, "which the previous government neglected". 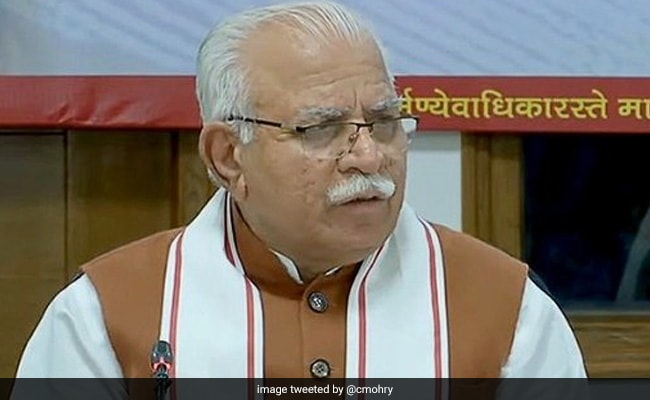 He also said his government had adopted a transparent recruitment policy. (File Photo)

Stressing the need for merit-based selection in government jobs to ensure an effective and efficient system of governance, Haryana Chief Minister Manohar Lal Khattar on Friday said about 70,000 youngsters were recruited through the HPSC and the HSSC in the state in the last five years. He also said his government had adopted a transparent recruitment policy.

Speaking as the chief guest at the inaugural session of the 22nd National Conference of State Public Service Commissions here, Mr Khattar said his government had scrapped the interview process for Classes 3 and 4 posts, according to an official release.

He said his government had recognised the talent of the candidates, "which the previous government neglected".

"Apart from this, we have also eliminated favouritism in the selection process, which prevailed earlier, thus paving the way for meritorious candidates to join government service," the chief minister said.

He added that most of the recruitment made during the previous regimes were facing litigation but contrary to this, as a result of the transparent recruitment policy adopted by the current BJP-led state government, candidates were being selected in government jobs in a fair manner, without any irregularities.

Mr Khattar congratulated the Haryana Public Service Commission (HPSC) and the Haryana Staff Selection Commission (HSSC) for adopting such a "flawless" system. He exhorted the recruitment agencies for all-out efforts to make the selection process more transparent. The BJP leader said his government was continuously working towards building a transparent system of recruitment in Haryana.

"It is for the first time that the state government has eliminated the interview process. Apart from this, we are also going to implement another reform under which the names of only those HCS or Class-1 officers would be sent to the UPSC for selection as IAS officers, who would clear the written examination to be conducted by the HPSC," he said.

The chief minister said it was the result of the atmosphere created by his government that the percentage of candidates from the state passing prestigious examinations like the National Eligibility-cum-Entrance Test (NEET), JEE and other engineering examinations was continuously increasing. He said though population wise Haryana was comparatively a small state, "yet, on an average, 40 candidates are clearing the IAS exam (from the state) every year".

Hailing the contribution of recruitment agencies, including the Union Public Service Commission (UPSC), in selecting meritorious candidates, Mr Khattar said their work was like that of a jeweller who had to choose the best gems.

He said there was a need for these agencies to bring about effective changes in their system, keeping in view the changing times.

Speaking on the occasion, UPSC Chairman Arvind Saxena said the state public service commissions had a mandate for making competition-based selections and providing a secure and stable civil service that was necessary for transparent and impartial governance. He said in two recent instances -- the lateral entry scheme for joint secretary-level officers of the government of India and empanelment of DGPs for states and Union territories -- the Centre and the Supreme Court had reposed faith in the UPSC for carrying out fair and transparent selections purely on merit basis.

Mr Saxena said as it was a fact that government jobs were a more preferable option among youngsters, "the challenge before us is to select the most suitable candidates in a transparent manner, re-design and improve our systems and make the competitive examinations less stressful for the candidates".

HPSC Chairman R K Pachnanda said the commission had adopted several measures to ensure a free-and-fair selection process, "which enables us to select good, meritorious candidates who would perform their duties judiciously and lead to a better system of administration and governance".